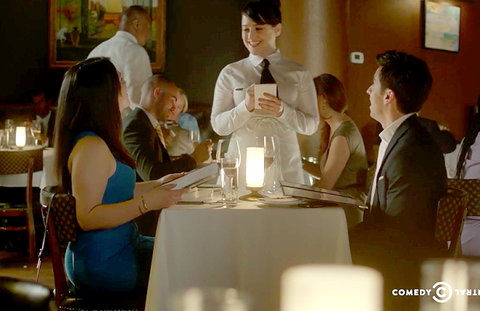 If you watched this week's episode of Broad City, the waitress probably seemed somewhat familiar to you. Well, get ready to have a '90s nostalgia-induced nerd-out, because it was none other than Mara Wilson—who played Robin Williams' daughter in Mrs. Doubtfire. Makes sense, since Broad City was paying homage to the final scene of what has to be one of the best movies ever.

Wilson no longer acts, but she landed the cameo after following Abbi Jacobson on Twitter. "She sent me a message saying, 'That's really weird that you followed me today, because we are working on an episode right now that's an homage to Mrs. Doubtfire,'" Wilson tells Brokelyn. "I think it was after a glass of wine, and I said, 'You know, if you want me to make a cameo or something on this, I totally would. I don't act much, I don't really like film or TV acting, but this would be really fun and I have a lot of respect for you two.'"

Illana Glazer's reaction? Exactly what you would expect: "[She] sent me a 'Yes, yes kween!' email."

"It felt good being there," Wilson continued. "There were also times being on the set where I was like, oh right, filming takes a long time. It's not the best job for a control freak like me. It took two days to film it. They kept apologizing the whole time, saying we're so so sorry, this is taking so long. And I said, 'You know, the original scene took two weeks to film, so you really don't need to worry about it.'"

You can watch the Mrs. Doubtfire homage below—but you'll have to check out the full episode to see Mara Wilson in action.

Mehera Bonner Contributor Mehera Bonner is a news writer who focuses on celebrities and royals—follow her on Instagram.
This content is created and maintained by a third party, and imported onto this page to help users provide their email addresses. You may be able to find more information about this and similar content at piano.io
Advertisement - Continue Reading Below
More From Culture
The Novels to Read When the Days Get Shorter
The Most Heart-Stoppingly Scary Movies on Hulu
Advertisement - Continue Reading Below
The Sexiest TV Scenes of All Time
The Scariest Movies on Netflix
'The Undoing' Is Fall's Most Thrilling Drama
It's Been a Weird Year for 'The Bachelorette'
When Does 'The Bachelorette' Air?
Fashion Fanatics Will Love Jenna Lyons’ New Show
Your Favorite Teen Heartthrobs Then vs. Now
Halloween Costumes You Can Wear for Work Zooms