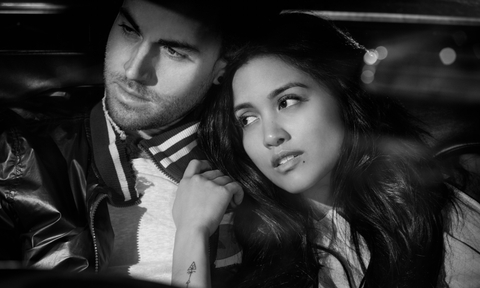 Courtesy of Us The Duo

Michael and Carissa Alvarado, AKA Us The Duo, were catapulted to fame in 2014 thanks to those #6SecondCovers you could not stop watching on loop. One of the first Vine sensations to be signed to a major label, the husband-and-wife due rode the wave of viral fame, from Good Morning America to Oprah's stage. But in the spirit of being true to their artistry, they decided to leave the mainstream pop life behind and release their latest album, Just Love (out July 22), independently.

"Most lullabies are written from the parent's perspective, but we wrote this from the point-of-view of the person being cared for."

"We were both starving creatively and needed a way to express ourselves musically after a long two years of hustling in the music industry," they told us in a joint interview. And trusting their intuition manifested into what can only be described as any musician's dream.

"On a last minute whim, we rented a studio across the country for three weeks, hopped a flight, and locked ourselves in a room with instruments and three other musicians," they explained. "We all sat in a circle, pressed record, and Just Love came out. It was an unforgettable three weeks that we'll never be able to create again, but we're thankful to have it on record and even more excited to share it with the world."

One of our favorite tracks off the home-spun record is their self-proclaimed reverse lullaby "Safe." Originally written as an upbeat dance track, it took on a whole new life in the studio.

"Michael randomly started playing it with a few obscure, haunting chords and we began to sing it in an emotional way we never had before," they said. "We changed a few lines and suddenly the song turned into a reverse lullaby. Most lullabies are written from the parent's perspective, but we wrote this from the point-of-view of the person being cared for. Today's world is getting scarier by the minute, and we all need someone to rely on. That's what this song is about—reminding how much we appreciate the people who care for us."

Here, the exclusive debut of Us The Duo's music video for "Safe."

P.S. Be *sure* to catch the pair live on their worldwide #JustLoveTour going on now through the fall.

Lauren Valenti Associate Web Editor I’m the associate web editor at Marie Claire.
This content is created and maintained by a third party, and imported onto this page to help users provide their email addresses. You may be able to find more information about this and similar content at piano.io
Advertisement - Continue Reading Below
More From Culture
The Cast of Grand Army Are BFFs IRL
A Look Back at Princess Anne's Life in Photos
Advertisement - Continue Reading Below
Who's in 'The Queen's Gambit'?
'After We Collided' Stars Play Trivia With Us
'The Crown' Season 4 Is Coming So Soon
It's Been a Weird Year for 'The Bachelorette'
Who Plays Townes in 'The Queen's Gambit'?
The Best Korean Dramas to Get You Hooked
To Save Victims, We Must Dismantle Purity Culture
Will There Be a Season 2 of 'The Queen's Gambit'?