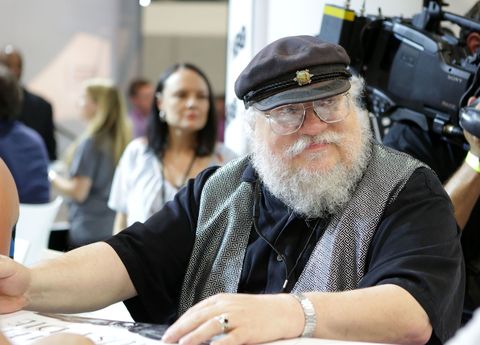 Much like you circa middle school, George R.R. Martin is a huge fan of LiveJournal, and hit the ancient social media platform to announce some exciting news. His other book series, Wild Cards (think of it as Game of Thrones' red headed step-sister), is finally being made into a TV show. We are not worthy! Though, can we please talk about the book covers for a sec?

The science-fiction series is a "shared universe" among several writers, and takes place in a post-WWII reality where a virus has wiped out most of human kind. In its place? Superheroes and mutants, naturally. The 22-book series is based on a role-playing game that George R.R. Martin enjoyed with friends in the '80s, and considering that Netflix's Stranger Things is based on Dungeons and Dragons, it looks like this is the way of the future.

Sadly, Martin won't be directly involved in Wild Cards' development (it's being made by Universal Cable Productions) thanks to his deal with HBO:

"I won't be working on the series myself... my own development deal is exclusive to HBO, and I am writing THE WINDS OF WINTER, as I believe most of you will recall but I have every confidence in Melinda Snodgrass and Gregory Noveck. They know and love the Wild Cards universe almost as well as I do, and I think they will do a terrific job. Wish them luck."

Cool, but are you really writing The Winds of Winter, George R.R. Martin? Pics or it didn't happen.