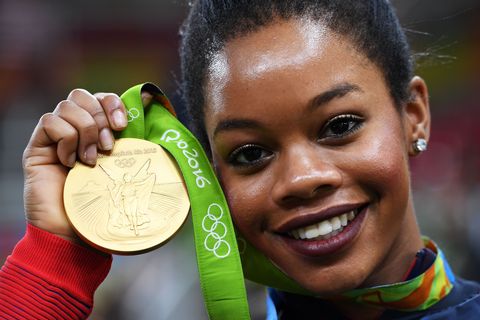 According to haters, Gabby Douglas can't do anything right. Despite representing the U.S.A. in two Olympic Games and being an impressive part of the gymnastics team—you know, the multiple-gold-medaling one—the 20-year-old athlete has taken heat from social media commenters on everything from her hair to the way she stands while listening to the national anthem. (She was photographed without her hand over her heart.)

"I tried to stay off the internet because there's just so much negativity," she recently told ET Online. "Either it was about my hair or my hand not over my heart [on the medal podium] or I look depressed...It was hurtful. It was hurtful. It was. It's been kind of a lot to deal with."

"I've always said it was an honor to represent the U.S.," she continued. "You always do this for your country, and then, like people say, for yourself and other people."

Douglas' mother, Natalie Hawkins, opened up earlier about the treatment her daughter has received: "What I saw in the stands was someone who was hurting and she was also angry," she told Reuters. "What was going through her head was 'I'm being attacked for everything I do so I might as well not do anything. Because no matter what I do, I am being attacked.'"

Haters gonna hate, Douglas. We're behind you. And so are a lot of people.