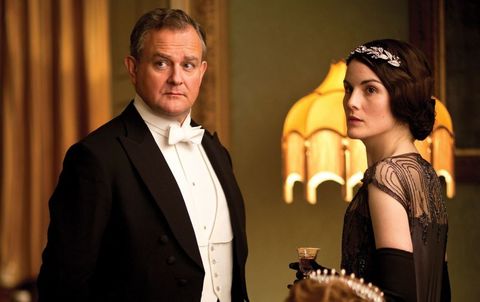 Downton Abbey was one of those shows that could have gone on forever. On the insanely addictive series, the members of the Crawley family and their household staff reacted to changing times, and created new generations to continue all the drama. But alas, it had to end at some point, and the world had to live with a few less Maggie Smith one-liners.

In an interview with Deadline, Julian Fellowes, who wrote every single episode, imagined what would happen next to his beloved Crawley family. He predicted that Lady Mary would use her ingenuity to keep the family estate in the family throughout the decades.

"My own belief is that Mary, whether you like her or dislike her, is a hard worker, and she's practical. I think she will employ the kind of advice that she needs," he said. "She would probably have opened the house to the public in the 1960s, as so many [similar families] did, and she'd have retreated to a wing, and maybe only occupied the whole house during the winters. My own belief is the Crawleys would still be there, just as the Carnarvons are today [at Highclere Castle, the real Downton Abbey]."

Since the show ended in the 1920s, it's sadly likely that the adult characters wouldn't be around in 2016. But there's a chance that little heir George, Mary's son who was born in 1921, might still be alive and kicking, along with his younger siblings. "George would have gone to the Second World War, and of course the fear is that he would be killed. We know that Mary is pregnant, so there's going to be another child," he said. "As for the title, I don't know where it would go beyond George, but let's hope he gets through that war and has children of his own."

This year's Emmy Awards will be the last in which Downton is up for any trophies. Fellowes is now working on a series called The Gilded Age for NBC, which he plans on writing entirely himself once again. The show will take place in New York high society in the 1880s. Looks like it will be a spiritual prequel to Downton, thank goodness.

But if you need your Fellowes fix for now, you can stream Doctor Thorne on Amazon:

This content is created and maintained by a third party, and imported onto this page to help users provide their email addresses. You may be able to find more information about this and similar content at piano.io
Advertisement - Continue Reading Below
More From Culture
Tati Gabrielle Is Incredible in 'You'
HBO Dropped More Glimpses of 'Euphoria' Season 2
Advertisement - Continue Reading Below
'Ginny & Georgia' Season 2: Everything We Know
All the Deets on Michelle's 'Bachelorette' Season
Thrilling New True Crime Documentaries
What Is Stephanie Land Doing Now?
'Succession' Is Ready to Go 'Full F*cking Beast'
The 2021 Book Releases You Don't Want to Miss
'Squid Game' Season 2: Everything We Know
Breaking Down the Ending of 'Maid'