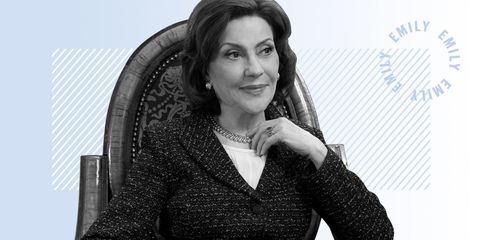 When Gilmore Girls premiered in fall 2000, I was in 7th grade and just a couple months shy of 13. I fancied myself a Rory Gilmore before Rory Gilmore was even a thing (though I'll admit I had my fair share of April Nardini moments—sadly minus the enviable science fair prowess).

I was bookish and nerdy, and while I wasn't shy, I was definitely introverted. I had a great relationship with my mom. I liked junk food way more than, uh, non-junk food. I dreamed of leaving my hometown for the Ivy Leagues. And as a middle schooler, all of the above was more than enough reason for me to feel like I was looking in a mirror when I saw Rory onscreen.

But confession: I stopped watching Gilmore Girls during season five. I could claim that I stopped out of protest for Rory's relationship with now-married Dean, but that would be a lie. At the time I supported her 100%, and thought it was great that their love found a way. I wasn't just drinking the Rory Gilmore Kool-Aid—I was chugging it like cops were about to break up the party.

In reality, I stopped watching Gilmore Girls for boring "life" reasons; I was 16, suddenly had a part-time job, and had a lot more school commitments (those Ivy League applications were fast approaching). My family didn't have TiVo (remember when DVRs were all TiVos?), so I eventually got a few episodes behind, which turned into lot of episodes behind. There was no way to catch up.

Still, even though I wasn't watching the show, Rory Gilmore was still in my heart. I had only seen her freshman year of college play out, but I was sure she was doing great (HA!), and still listed her among my fictional idols. When I left for college, I cut my hair into a bob because that's what Rory did her freshman year. It felt symbolic and important, and made me feel close to her—as if by getting her haircut, I was also channeling her academic essence.

Confession No. 2: When Gilmore Girls came to Netflix, it took an embarrassingly long time for me to finish the series. But when I did finally watch in anticipation of Gilmore Girls: A Year in the Life, I didn't just finish it. I binged it. And by the end of the show, Rory was no longer my favorite Gilmore Girl. Neither was Lorelai. No, in 2016, my favorite Gilmore Girl was—no, is—Emily Gilmore. (It's sort of like the time I realized that after years self-identifying as a Ravenclaw, the Sorting Hat would definitely whisper, "...But you could do great things in Slytherin" upon being placed on my head).

As a teenager, I identified so strongly with Rory that when we weren't on the same page, I adjusted to be more like her. As an adult, the Gilmore lady I aspire to emulate is Emily, 100%. Here's why she's a boss:

She knows who she is and what she's about.

I want to have as much confidence in my choices as Emily does. Not to wait around for things to happen, but to make them happen. The older I get, the more and more I do just that.

She isn't afraid to ask for (okay, demand) what she wants out of life.

Emily knows what she wants and that, I think, is half the battle. The younger Gilmores are often crippled by indecision, but Emily is incredibly decisive. That's admirable.

She plays the game, but she knows when to break the rules and stand up for her and hers.

Remember that time Emily straight up dismantled Shira Huntzberger for saying Rory wasn't good enough for Logan? Remember how that was the best?

She's honest (sometimes to a fault).

Sometimes the truth hurts, but that's never once stopped Emily Gilmore from telling it.

She's stubborn, but she tries to change.

One of the things I admire most about Emily is that, as set in her ways and Type A as she is, she doesn't always want to be those things. Emily tries to be flexible, and connect with Lorelai and Rory. She doesn't always succeed, but when she does, it's beautiful and there's pudding for all.

To paraphrase the great philosopher Wallace Fennel, underneath that angry grown woman shell, there's a slightly less angry grown woman who's just dying to connect with her daughter and granddaughter. That's the Emily I love.

This content is created and maintained by a third party, and imported onto this page to help users provide their email addresses. You may be able to find more information about this and similar content at piano.io
Advertisement - Continue Reading Below
More From Culture
The Most Exciting New TV Shows of 2021
Get to Know Delessa From 'The Circle'
Advertisement - Continue Reading Below
36 Movies With Super-Romantic Sex Scenes
Anne Hathaway & Elizabeth Nyamayaro on Compassion
When You Can Expect New Episodes of 'The Circle'
'Ginny & Georgia' Season 2: Everything We Know
Get to Know Courtney From Season 2 of 'The Circle'
'The Circle' USA Is Actually Filmed In the U.K.
The 25 Hottest Movies on Hulu Right Now
There's a UK Version of 'The Circle'