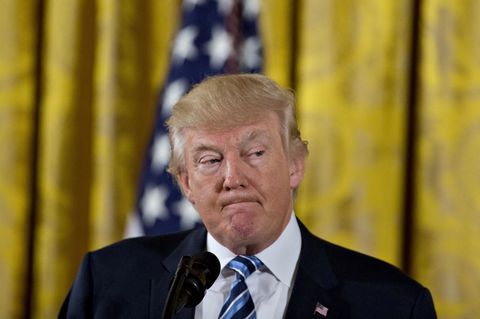 It seems a complicated matter to transfer the Twitter archive of a departed president to another account and usher in the new president as the original handle's owner. (It's complicated just typing that in a way that makes sense.) When a president leaves office, all his tweets are migrated from the official @POTUS account to a new numbered handle—in Obama's case, @POTUS44—before his replacement takes over as admin. Along with the log of tweets, the followers are migrated to the new account as well.

Apparently, Twitter stumbled in the transition process this time around. Many users were made to automatically follow the @POTUS account, now owned by Donald Trump, along with other White House admin accounts, even though they had intentionally unfollowed them before Trump's inauguration. As you can imagine, this caused of bit of an upset among users who strongly dislike our new president and his Twitter habits and had no desire for his tweets to show up in their feed.

The error reportedly about 560,000 users, which was quickly brought to Twitter's attention as people began sounding off complaints.

I absolutely unfollowed @POTUS last night but I just checked and I'm following again. What.

How is it migrating when I wasn't following them?

y’all check and see if you’re following that @potus account after unfollowing last night. @twitter is forcing follows. just happened to me

This is SO WEIRD. It’s like U2’s album on iTunes I DO NOT WANT IT. https://t.co/sy6cnIYuKU

WTF?! Did Trump just force a bunch of us to follow his account?! I never followed @POTUS here & this morning I wasn't either but now I am?! pic.twitter.com/8FppKG2zNP

Fuck you, @Twitter. I was intentionally NOT following Trump's new account and I come back to see this. This is not cool. pic.twitter.com/JchjmiB1pr

even if you unfollowed @POTUS, @FLOTUS and @VP, DOUBLE CHECK THAT TWITTER HAS KEPT IT THAT WAY. It forced me to follow Trump last night.

Twitter CEO, Jack Dorsey, tweeted out an explanation and apology to users experiencing the issue. "This was a mistake, it wasn't right, we own it, and we apologize. No excuses," he wrote.

All: we investigated what happened here, and we made some mistakes (which have been corrected). Some context first. https://t.co/W1n3Xs6LaN

His statement, delivered in a series of tweets, was as follows:

The Obama Administration worked with all their platforms to craft a transition plan. Because @POTUS is an institutional account (not personal) they felt it only fair to transition accounts with followers intact, but 0 tweets. We kicked off that plan at 12p Eastern yesterday. If you were following @POTUS before 12pET, by end of day you'd be following *two* accounts: @POTUS44 (44th Admin) and @POTUS (45th Admin). Two issues were reported during the day which we spent the night confirming and have now corrected: 1. People who followed @POTUS44 (Obama Admin) after 12pET were mistakenly set to also follow @POTUS (Trump Admin). 2. Some people who unfollowed @POTUS in the past were mistakenly marked to now follow @POTUS We believe this affected about 560,000 people. This was a mistake, it wasn't right, we own it, and we apologize. No excuses.

Sarah Lindig Senior Digital Editor, Special Projects Sarah Lindig is the senior digital editor, overseeing special projects for Harper's Bazaar.
Advertisement - Continue Reading Below
More From Culture
Jennifer Lawrence Will Star In a Netflix Film
Who From Bachelor Nation Will Be on the 'Games'?
Advertisement - Continue Reading Below
The Best Romantic Films of the Year (So Far)
An Investigation Into the Next 'Bachelorette'
Mindy Kaling & Priyanka Chopra Team Up
How the 'To All the Boys 2' Soundtrack Was Made
Does 'Bachelor's Madison Prewett Self-Eliminate?
How Much Does 'The Bachelor' Make?
Tales of a Hollywood Con Queen
Who Will Be on 'Bachelor in Paradise' in 2020?