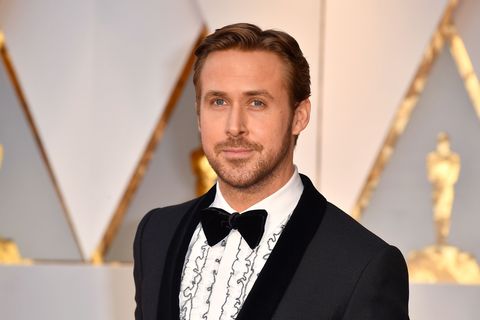 Turns out Gosling brought his older sister, Mandi Gosling, as his Oscars plus one. And let's be real—that's pretty damn cute.

It's also not the first time. Here they are at the Gotham Awards in 2006:

And here they are at the Screen Actors Guild Awards in 2008:

Nine years later, they're taking on their biggest red carpet yet. But Gosling's not the only one making it a family outing tonight. Emma Stone also took her brother, Spencer, while some celebrities (Dev Patel and Lin-Manuel Miranda, notably) brought their moms. THEIR MOMS.

All the cuteness. And here's more, just for fun...

Samantha Leal Senior Web Editor I'm Sam, the senior editor at MarieClaire.com.
This content is created and maintained by a third party, and imported onto this page to help users provide their email addresses. You may be able to find more information about this and similar content at piano.io
Advertisement - Continue Reading Below
More From The Oscars 2020
See Adele's Perfect Oscars After-Party Look
Emrata Wore the Most Emrata Outfit to Oscar Party
Advertisement - Continue Reading Below
J.Lo Outshone Everyone at the After Parties
Please Look at These Brad and Regina Photos
Chrissy Wore a Mint Dress With a High Slit
Jennifer Aniston Saved Her Best LBD for Last
Did You Spot Charlize Theron's Hidden Hair Detail?
Billie Eilish's Reactions Made the Oscars
Timmy Photobombed Margot on the Oscars Red Carpet
Elizabeth Banks Rewore Her 2004 Oscars Dress