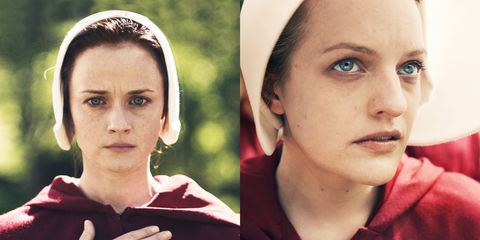 Here, their take on an all-too-familiar dystopia.

Elisabeth Moss: It's a dystopian present, actually. A fundamentalist regime, called Gilead, has taken over the U.S. and is basically running things according to certain scriptures in the Bible. I play Offred, who is a "handmaid," a fertile woman who's been captured and sort of enslaved to be a breeder. [American women are victim to rampant infertility in Gilead.] Married couples who cannot have their own child get a handmaid. We have sex with the husband, while the wife is present, and hopefully get pregnant. And each handmaid has a partner—mine is Ofglen [played by Alexis Bledel]—because we're not trusted to leave the house by ourselves.

MC: How can Offred and Ofglen build any kind of friendship with so much distrust?

Alexis Bledel: The tension that charges every scene, because we're being policed everywhere we go, is the constant threat of being punished. That really influences the way that the handmaids speak to one another and what they are able to talk about. Those conversations are so loaded and they have to be so careful, and the fact that they break through to actually open up to one another is really telling about both characters.

MC: Offred and Ofglen share this intense yet quiet, almost invisible, strength. How do you survive in a world that is so horrible?

EM: That's what we do as humans. In the darkest of times, we find something we can believe in, and we find some light.

AB: Ofglen is definitely somebody who fights back. So many of the handmaids do in small ways every day, which is inspiring. Ofglen just decides to take it many steps further.

EM: It was important to me to play Offred as you or I or any woman who'd find herself in Gilead. She's a heroine, but she's a normal person. She isn't somebody you would believe could escape from this world, you know? She finds ways to survive that are very human. Over and over again throughout the season, Offred finds herself totally alone, but she still finds one person she can help or save. Margaret Atwood writes, "You can mean more than one. You can mean thousands." In the end, we're individuals, but grouped together, we can be thousands.