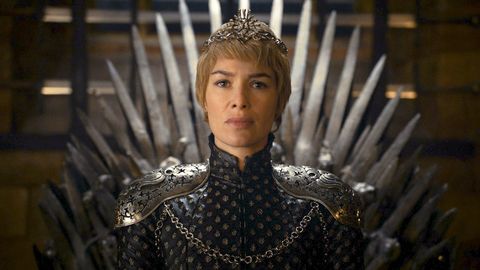 She may play the unshakable Queen Cersei on HBO's Game of Thrones, but in real life, Lena Headey is a human woman that's subject to the same emotional and mental challenges many others face.

On Thursday, one of her fans asked her if she ever feels insecure.

@IAMLenaHeadey Do you get insecure Lena? <3

Three minutes later, she provided an intimate response in which she admitted she's struggled with anxiety and depression in the past.

I overthink for sure. I am familiar with depression. I get HUGE anxiety (always fun 😫) Insecure, not really. https://t.co/5dwrO4ByYz

Then she offered some wonderful, concrete ways to deal with your inner demons, especially in the current political climate.

Anxiety is a beast. You have to talk to beasts. Release them back into the wild. Easier said than done I know but still. Good to Practice.

Join the club. I tend to turn it around by the only known antidote, by judging myself favourably and compassionately.

Anxiety. Depression. It's real and it's chemical. It's also spiritual. .. stay with me everyone (and before you ask, yes I'm ok)

Globally we see constant destruction of human lives. Which no matter your belief, has an effect. If we scale it back to family and community

Let's REMEMBER that. Don't be afraid to let someone really SEE you. Magic happens when you are vulnerable and truthful and HUMAN.

Try one conversation face to face without hiding your true self. You'll feel terrified maybe .. for a second .. and then BOOM ...

Drop the Mike. You fucking did it. Swagger home with some complex fucked up shared human realness 👍👍😘👻💗💗💗

Your thought will become an action. I know it. Deep breaths. https://t.co/VYVc90jV5D

but what if you're scared because people might judge you or hurt you if you show your true self ??