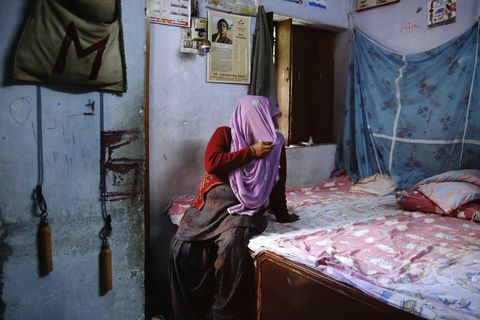 Indian classmates Tejasweeta Pradhan, 18, and Shivani Gond, 17, recently completed an assignment that was definitely not part of their high school curriculum: They acted as decoys to help police and local activists smash an international sex-trafficking ring in their home region of Darjeeling, a district in India's West Bengal State.

The operation began last May when, under the direction of local anti-trafficking group Mankind in Action for Rural Growth (MARG), the girls opened a fake Facebook account and pretended to be young women from neighboring Nepal desperately looking for work. They began communicating with a woman MARG had identified as part of a large network of traffickers who use the social media site to lure young girls to brothels in India's capital, New Delhi, with the promise of easy money. Human trafficking between Nepal and India for forced prostitution is a huge business—an estimated 7,000 Nepalese women and girls are smuggled across the border by criminal networks each year, and according to UNICEF, around 200,000 are now enslaved in Indian brothels. Women and girls from the Indian side of the border, including the area where Pradhan and Gond live, are also vulnerable, as they are prized by traders for the "fairer skin" they share with Nepalese neighbors.

Tejasweeta Pradhan and Shivani Gond meet an Indian dignitary at a ceremony in New Delhi awarding their bravery, January 2017
Courtesy of Mankind in Action for Rural Growth

Pradhan and Gond were conscious of the dangers of trafficking thanks to awareness seminars run by MARG at their school. When Gond's older brother Vishal, a volunteer with the activist group, asked for their help to befriend the female trafficker, they were eager to assist. To gain her trust, Pradhan and Gond chatted with the woman online over several weeks, expressing envy about her "fashionable clothes" and asking her advice about finding employment. "She became quite open with us," Pradhan recalls. "She told us that she could get us work, but that we would have to sleep with many men. She said we could earn around 25,000 rupees [$370] a month, which is 10 times the wages of working on a local tea plantation." (Tea production is the region's most robust industry.)

"She told us that she could get us work, but that we would have to sleep with many men. She said we could earn around 25,000 rupees [$370] a month." —Tejasweeta Pradhan

Eventually, the woman asked Pradhan and Gond to put on makeup and send her photos to prove that they were pretty. "Twenty minutes after we sent the pictures, she sent back fake Indian ID cards with our faces," Pradhan says. The woman told the girls that she would pick them up near the India-Nepal border. Little did she know, MARG and the Darjeeling police, who worked together to organize the sting operation, would be waiting. "Our first priority was to ensure the safety of the schoolgirls," says Nirnay Chettri, cofounder of MARG. "We briefed them intensively about what to do and reassured them they would never be alone at any time."

In June, Pradhan and Gond boarded a train for the three-hour journey to a hotel where the trafficker had told them she would meet them. "We had to wait for her for nearly four hours," says Gond. "It was frightening because the police had warned us that some members of the gang could be armed." The schoolgirls couldn't stop shaking, even though a number of police officers were inside the hotel disguised as waiters and customers. Chettri was also close by, dressed as an ice-cream vendor, along with Pradhan's mother, Kamlesh Rai, who was dressed as a peasant. "I was reluctant to allow my daughter to take part in this operation at first," says Rai, a schoolteacher. "But I realized this was the best chance to catch the criminals red-handed and save many other girls." In her spare time, Rai works as a counselor to educate young women in the Darjeeling area about the dangers of falling prey to traffickers. "Many girls from poor families want to leave home to make money. Sometimes they think they are going to be domestic helpers, and they end up in sex rackets. So they need awareness training to make sure this does not happen to them."

"Sometimes girls think they are going to be domestic helpers, and they end up in sex rackets." —Kamlesh Rai

Fortunately, Rai was right about the decoy plan working out. When the female trafficker and two other gang members arrived, police swooped in. Those arrests led police to the network's ringleaders in Delhi, who are now awaiting trial. "This gang was responsible for trafficking thousands of victims, and they are now out of business," says district inspector Deo Gazmer, the Darjeeling police chief in charge of the sting.

In January, the Indian government honored Pradhan and Gond with prestigious National Bravery Awards for their crucial role in helping to catch the ringleaders, saying they showed "exemplary courage." (The award is handed out annually by Indian Prime Minister Narendra Modi to courageous young people between the ages of 6 and 18.) "We would definitely do such work again if necessary," says Pradhan. "Sex trafficking is such a terrible problem—it was scary, but worth it."