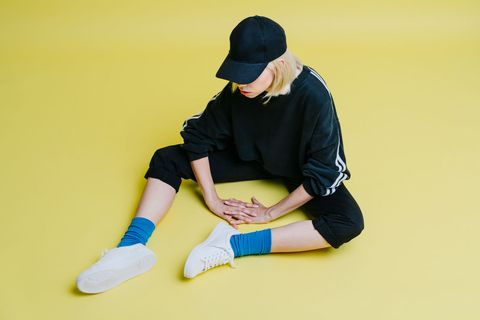 Recently, while changing doctors, I got ahold of my psychiatric file. Despite the common knowledge that you should avoid reading your own mental-health diagnosis at all costs, as the contents have the potential to affirm your own worst fears about yourself, I (obviously) read it anyway.

It wasn't the size-up of my mental or emotional condition that bothered me. It was that the nurse practitioner who did an initial evaluation, a woman with seen-it-all eyes and a smoker's cough, described me as "disheveled." I was going through a particularly wretched breakup when the evaluation took place—but it didn't help that as I read the report, clutching a sweaty iced coffee in my new doctor's waiting room, I was wearing an old Elvis sweatshirt with one of those "XL" size stickers stuck to my jeans. To add insult to injury, I was going on a date in a few hours—the first in quite some time. It took all my personal affirmations not to ghost.

"There are days when I have the kind of depression that makes basic self-care seem exhausting and pointless, and the prospect of feeling sexy akin to the mysterious building of Stonehenge."

Now, I don't look "disheveled" all the time. Most of the time I would say I look fine. Occasionally I even look great. But there are also days when I have the kind of depression that makes basic self-care seem exhausting and pointless, and the prospect of feeling sexy or even well put-together akin to the mysterious building of Stonehenge.

As I've gotten older and more used to coping with my depression, I've developed a baseline for being just presentable enough, which I stick to even on days I want to ride the subway in a jam-stained bathrobe and Joker lips: clean body, clean clothes, brushed hair, a splash of good perfume. It's simple, and seems toddler-level basic, but it helps me.

I've read that what a person wears and how they present is directly related to their self-esteem, levels of personal success, and, of course, attractiveness to others—in her book Mind What You Wear: The Psychology of Fashion, British psychology professor Karen Pine goes so far as to say that what you wear subconsciously affects your mental processes and can actually, literally change your life. She mentions a woman, Meg, who chose to buy a particularly striking hat despite doubts she could pull it off, then met her future husband a few months later while wearing it. He claims it was the reason he noticed her. It's a bit of a stretch, but Pine's point was not the hat—it was that confident choices and expressions are catalysts for transformation, positive change, and "permission to behave differently." Subtle details in how we present ourselves change how others see and react to us, and, in turn, how we feel about ourselves.

On Being a High-Functioning Depressed Person 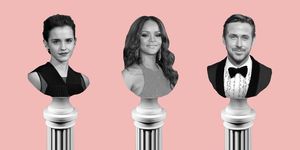 But this idea presents a conundrum for the depressed, since the symptoms of depression can seriously hinder the ability to get to the point of "wearing the hat," so to speak. Depression can—as I prove—hinder the willingness to even get dressed at all. Besides just generally feeling like shit, there are sleep disturbances, changes in appetite and weight, slowed thinking, trouble concentrating, apathy, loss of interest, hopelessness, exhaustion, sexual dysfunction, and unexplained physical problems to contend with. There's also a neurological reason that self-care is difficult for those with depression: Depression is a dysfunction of the frontal lobes, the area of the brain that's responsible for decision-making and problem-solving. Simple things can become overwhelming, nevermind finding the energy to be daring or detailed.

I'd be lying if I said I didn't fantasize about being the kind of person who's always coiffed. Bangin'. Uniquely clad with a striking eye palette. Or, at the very least, never disheveled. But more often than not, I wake up disinterested or daunted by the effort it takes to feel really attractive. On those days, I stick with "adequately kempt." And you know what? It'll do.

Advertisement - Continue Reading Below
More From Culture
Why You Keep Seeing "Until Tomorrow" on Instagram
The 19 Best Murder Mystery Movies
Advertisement - Continue Reading Below
How to Join Marie Claire's Online Book Club
'In Five Years' Is MC's April Book Club Pick
'Little Fires Everywhere' Is a '90s Time Capsule
How Murtagh Dies in the Outlander Books
What Happened to John Finlay From 'Tiger King'?
'Outlander' Season 5 Is Back to the Show We Love
The Best Cooking Shows on Netflix
The Wildest Reviews of Joe Exotic's Zoo