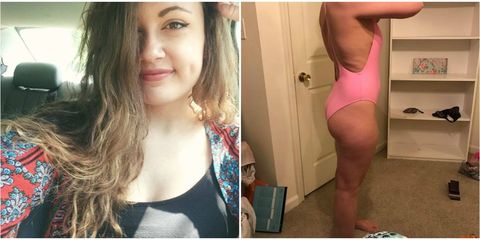 Nowadays, confidence is hard to come by even when it seems like we've made leaps in the right direction. Despite movements calling for body positivity and acceptance, women especially still find it difficult to step into the public eye feeling judgment-free.

Take for example, what reportedly happened to Knoxville, Tennessee resident Tori Jenkins this week. It was hot, so she put on a bathing suit and headed over to her apartment complex's pool. But nearly three minutes after she arrived, Jenkins was told by two leasing consultants that the suit — a pink one-piece — was "inappropriate."

She claims she was given three options: change, cover up or leave. Jenkins' fiancé, Tyler Newman, went to Facebook to share his outrage.

"Today, my fiancé was faced with either changing her bathing suit, covering up with shorts or leaving the pool that we paid a $300 fee to maintain," he wrote. "Tori was accused of wearing a 'thong bathing suit' and told there were complaints about the way she was dressed."

The pool rules at Smoky Crossings apartment complex state that "duly appropriate attire must be worn at all times," and Jenkins' swimsuit seems ... duly appropriate. See for yourself:

The couple (Jenkins, 20; Newman, 21) has been living at the complex for about two months and said they've never encountered anything like this before. But when Jenkins went to the office to report her situation, she continued to be body-shamed … by another woman.

"She was told by the leasing consultant that her body, because it's built more curvy than others, is 'too inappropriate' for children to be around," Neman claims in his post. The consultant even went so far as the say she wouldn't want her own children around Jenkins.

Here's the kicker: Jenkins was reportedly told she was responsible for how men might react to her appearance. Newman wrote that the consultant's exact words were: "There are a lot of teenage boys in this complex, and you don't need to excite them."

"I think she's the most beautiful woman in the world, but I also respect her," Newman went on to write. "I would never make her or any other woman feel less than what she's worth because of her outfit or her looks." (We hear ya.)

However, Newman stated, "Today, my fiancé was told that she is less important than how men feel around her."

People are showing their support. "You look beautiful in your swimsuit!" one Facebook user commented. "Wear. What. You. Like. Women, worry about your sons' behaviors instead of body-shaming other women."

While the Internet is rallying behind Jenkins, she has also received some negativity about her appearance. She addressed the backlash in her own Facebook post.

Jenkins told GoodHousekeeping.com that it has been hard, but she's trying to keep busy and focus on the positive feedback she's been receiving. "I've had so many amazing women and men reach out to me, and that's what has really gotten me through this whole ordeal."

Her fiancé said the situation has been an eye-opener. "I was raised to respect women, and I really despise people [who] make women out to be objects or property," he said. "And actually witnessing it firsthand … just baffles me."

Jenkins agreed. "Before this happened, I was always well aware that body-shaming and over-sexualization was an issue, but once you really see and experience it yourself, your view definitely changes."

The couple say they haven't received any word back from apartment administration, and Newman revealed they feel uncomfortable living there and that, as of now, they're "exploring other options."

"I'll definitely be speaking out on this issue more," Jenkins concluded. "I'd love for other women to take this as a reminder to lift each other up and support one another."

GoodHousekeeping.com reached out to Smoky Crossing Apartments, and they responded with the following statement:

Smoky Crossing is a welcoming family community. Multiple residents within our community complained and expressed concerns regarding Ms. Jenkins' swimwear. In accordance with our pool policies, which are posted near the swimming area, one of our leasing consultants requested Ms. Jenkins wrap a towel around herself when she was walking around the pool. Ms. Jenkins was never asked to leave the pool. In addition, our leasing agent did not state that Ms. Jenkins' swimwear would 'excite teenage boys.' Ms. Jenkins and Mr. Newman are valued members of our community. However, we feel it is inappropriate to equate requesting Ms. Jenkins to cover up with sexual harassment or 'rape culture.' Smoky Crossing denounces harassment in all forms.

In response to their statement, Jenkins said she is standing by her side of the story.