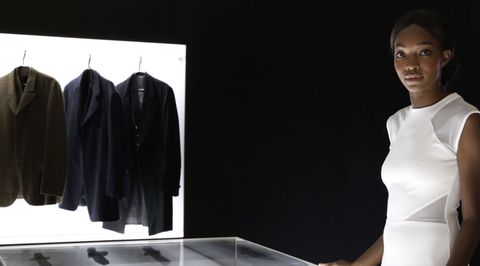 I'm a live your fandom kind of person. I dressed in full robes to visit The Wizarding World of Harry Potter and took up martial arts as a kid because I was *kind of* convinced I was going to be called up as the vampire slayer. But when I got my invitation to go to Westworld, I was nervous.

Risking heat stroke wearing fleece in Orlando in July or a concussion via a round kick to the head is one thing, but stepping into the world of Westworld? That could be dangerous. Surely HBO wouldn't pay actors to sexually harass me or, you know, actually shoot me with an old-timey pistol, right? There was only one way to find out.

I arrived at my appointment (Westworld: The Experience is a painfully exclusive—literally, I witnessed people cry when turned away—by-appointment-only event at this year's San Diego Comic-Con) and was greeted, as promised, by a Delos employee dressed in all white. My host was beautiful, pristine, basically everything you'd expect from a Delos employee.

I was ushered up to the Delos offices along with the rest of my small group. I may have entered the Hotel Palomar in San Diego, but when I stepped out of the elevator, I was in Delos, complete with themed signage (R&D this way, exit to the high speed rail that way).

After spending time with a couple of Delos' hosts (who my logical brain tells me were human actors, but if I found out HBO had actually learned to make beautiful, hyper-realistic robots, I wouldn't be surprised) and perusing some of the weapons and clothing I might see inside Westworld, I was taken to the next stage of the process: Intake evaluation.

This was probably the trippiest part of the entire experience. I was led to a small, dark room, where a Delos employee interrogated me, asking a string of bizarre, personal questions.

"What percentage of your dreams would you characterize as nightmares?"

"Hold out your hand. Look at your fingers. If you had to lose one of them, which would you choose?...Now, please mark it with an X." (At this point, I was handed a black marker to clumsily mark the ring finger on my dominant hand—I later observed that everyone else in my group went pinky, for what it's worth.)

At the end of the verbal BuzzFeed quiz, the Delos employee selected a hat for me to wear in Westworld. I'll admit, I expected (/kind of wanted? Is that bad to admit?) to be given a black hat, but apparently my answers revealed some inner good and I was deemed a White Hat. (But it worked out okay—they let you keep the hat, and I wore mine all night around San Diego, because I'm an adult, and a lovely woman at CVS told me it was a "powerful hat—more powerful than a man would have even" and it was the best compliment I've ever received.)

Third, it was the moment of the first clue about Season 2. The video begins as a promotional video for Westworld the theme park, but starts glitching and showing flashes of footage from the show (during this time, the host who is guiding you also starts freezes and twitching, because this glitch is SYSTEM-WIDE, obviously). Among the clips from the violent ends of the finale is what appears to be a new shot of Ed Harris (AKA the Man in Black, AKA William), sitting in a Westworld bar looking bloodied, but still very much alive and mischievous as ever.

The second clue came moments later, after the host came out of her mysterious glitch, acting as though nothing had happened, and led us down a hall. While most of the doors were marked WW for Westworld, we paused briefly in front of one marked SW—perhaps for "Samurai World"? Considering the clanging of swords that could be heard on the other side of the door, it seems likely that the highly-speculated second World of Delos will indeed make an appearance, if not in Season 2, then somewhere down the line.

After this, we were guided into the Experience's main event—the Mariposa Saloon.

Once inside, we were greeted by Jewels, a Maeve-esque character and served authentic (if we take the Westworld hosts' word for it) old-timey drinks. A figure in black watched quietly from the shadows, and I half-expected him to start a scene, but no scene came. We tried three drinks, we chatted and interacted with the hosts, listened to the player piano, and then, eventually, we left.

My Westworld experience wasn't full of violent delights (but, TBH, that's more than okay with me), but that almost made it more surreal. I felt, for a half an hour or so, like an actual guest of actual Westworld (minus the moments when my fan senses tingled at the subtle clues hidden in the experience).

So what was it like, to actually be in Westworld (or the closest thing we have right now, at least)? Honestly, it was awkward. It was tense. It was immersive. And, in its own way, it was freeing. I'm not sure I'm quite ready to live in a world without limits just yet, but I'm glad I visited.