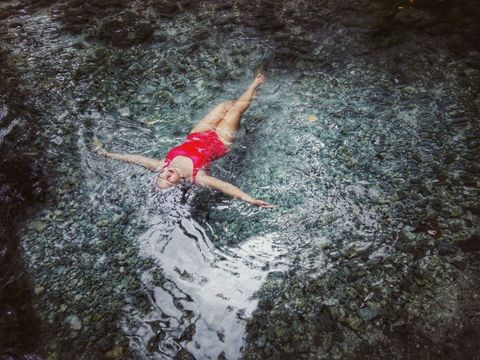 For a lot of women, certain clothing milestones pepper our lives: first bra, first splurge, first work outfit. For me, though, the most fraught sartorial turning point in my life came very recently, in the form of a bathing suit: my first one-piece.

For years I put off buying a one-piece bathing suit because I associated it with things I could not abide in myself—namely, aging. As someone who writes about feminism and the unrealistic expectations put on women throughout our lives, I know all the ways that society makes us feel lousy about getting older. But it's one thing to know something intellectually and quite another to deal with it emotionally. And part of doing this one silly thing—buying a particular kind of bathing suit—meant facing my own internalized ageism and bias.

I resisted. I associated one-piece bathing suits with older women and the most dreaded of fashion adjectives: "matronly."

The first time I wore a bikini, I was definitely too young. There's a picture of my sister and I, just 6 and 4 years old, posing on the beach in orange string bikinis that my aunt had bought us that summer. No one thought of it much in those days, but looking back there is something so unseemly about giving little girls the appearance of breasts they won't have for a decade. Still, since that picture was taken, I have always worn bikinis.

I remember the thrill I felt when I realized I'd actually be filling out a bikini for the first time, the embarrassment that washed over me with the same force of the rough wave that knocked my top off, the concern over my changed body when I bought a modest hipster two-piece right after having my daughter. 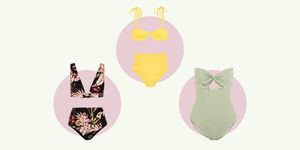 The 23 Most Flattering Swimsuits

But as I entered my late 30s, I started dressing differently all-around. I wore clothes that were tailored instead of tight, shoes that were more comfortable than the platforms I used to toddle around in, and invested in pieces I wanted to last me years. I still dressed out of a desire to be fashionable, but age-appropriate. My biggest fear was succumbing to "cool mom" syndrome: being the kind of gal who borrows clothes from her teenage daughter or still shops at outlets for teens. (I admit, this came from a place of deep and unkind judgement.)

But when summer came last year, and I saw a one-piece in a print that I loved, I resisted. I associated one-piece bathing suits with older women and the most dreaded of fashion adjectives: "matronly." As if in order for something to be fashionable, it needed to be made for a younger person!

I like myself more as a nearing-40 year old—much more so than I ever did in my 20s. I feel smarter and more sure of myself, savvier and less likely to give a fuck.

In one of my favorite articles about sexism, ageism, and fashion, Rebecca Huval at Racked writes about how we should reclaim "matronly" from meaning something negative: "A matronly, dignified dress with an empowering design might be exactly what's missing from stores. With an expanded cultural understanding of what old age can be, including self-possessed and badass, we might begin to find racks of matronly dresses that shoppers have been sorely missing."

When we disparage something specifically because it's made for older women, what we're saying is that older women themselves are not something to aspire to be. But the truth is, I like myself more as a nearing-40 year old—much more so than I ever did in my 20s. I feel smarter and more sure of myself, savvier and less likely to give a fuck.

Oh, and when I finally tried that suit on, it looked out-of-the-park amazing.