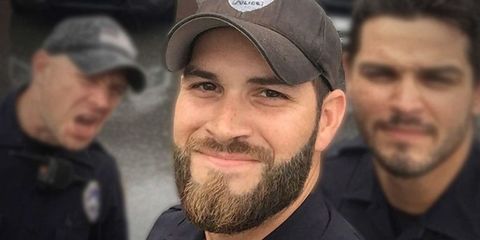 On Thursday, The Gainesville Sun received screenshots from 28-year-old officer Michael Hamill's alleged Facebook profile showing racist, anti-semitic comments he seems to have made in 2011 and 2013. You may know Hamill as the "hot cop" who went viral after the Gainesville Police Department posted a picture of him and two other officers in the wake of Hurricane Irma, inspiring thousands of thirsty comments. All of which is now being cast in a very different light.

Despite its report, The Sun has not officially confirmed the authenticity of the screenshots, and there is currently no evidence of Hamill's Facebook profile online.

But the Gainesville Police Department has suspended Hamill (with pay), and they've since removed the original "hot cop" photo from their Facebook account. In a statement on their website, they say they're "reviewing" the allegations:

Several citizens have brought information to our attention regarding a complaint against Officer Hamill. GPD is reviewing the allegation and will do so in accordance to Florida law and department policy. Under Florida Law, complaint information is confidential until an investigation is concluded. Officer Hamill has been suspended with pay. The Gainesville Police Department prides itself with our philosophy and mission of compassion, inclusion, and respect and will fully review the matter.

Amid blowback over Hamill's alleged racist Facebook comments, there have been several concerns about the police department's hiring process. "I have questions regarding when the agency knew of the posts," says Charles Wilson, chairman of the National Association of Black Law Enforcement Officers. "Based on the thoroughness of their background checks and screening process prior to actual hiring, they could have found this and perhaps made a different hiring decision."

"So the question becomes whether the agency scrutinized candidate's social media use during the background investigation," he continues. "If he was expressing these attitudes and biases on Facebook, then it is likely that he also expressed them to people he associated with."

MarieClaire.com has reached out to the Gainesville Police Department for comment.