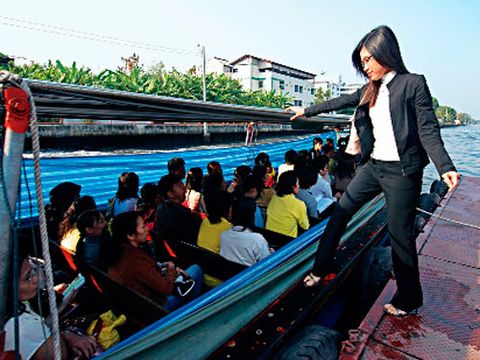 "My job is in the middle of some of the worst traffic in Bangkok. If I drove to work, it would take me an hour-and-a-half, but the boat only takes 20 minutes. The only delay I've ever experienced was once when the ticket taker slipped and fell in and we had to wait while they collected all the floating banknotes."

PROFESSION: Consultant at The World Bank

"I ride in a special women-only metro car that runs between 7:20 and 9:20 a.m. The cars were created in 2005 due to frequent complaints that women were being groped and sexually harassed. I was a victim a few times when I was younger, and it was-and still is-a humiliating experience. I had to learn how to position myself against unwanted moves in even the most overcrowded train. Now, I've seen a few men get visibly anxious when they realize they've accidentally boarded a car during women-only time!"

"My commute takes 45 minutes to an hour. I blade four to five miles if I start from home, six to seven if I drop my kids off at school. I used to take the subway, but this doesn't take much longer. Plus, I like to work out every day, and there's no comparison between being stuck underground and soaking up sun along the Hudson River. I see everything: tourists waiting to take Circle Line cruises, muckety-mucks catching helicopters to the airport, people flying through the air at a trapeze school. What's slightly embarrassing is the number of people I see who know me. I almost ran over a client once!"

"My commute is down to the dock and into the plane. I run a company called Sky Trekking Alaska. We fly every day at 8 a.m. and operate out of the Crystal Creek Lodge, taking guests on expeditions all over the state to go bear-watching or fishing, or to the Iditarod dogsled races. I've known I wanted to be a pilot ever since high school. It's a feeling like no other, like you can do whatever you want-even land on an ocean!"

This content is created and maintained by a third party, and imported onto this page to help users provide their email addresses. You may be able to find more information about this and similar content at piano.io
Advertisement - Continue Reading Below
More From Culture
'WNOIW' Isn't Your Typical Thriller
Who's Who in Netflix's 'Emily in Paris'
Advertisement - Continue Reading Below
Take Our Quiz to Find Out How Safe Your Info Is
The Privacy Whisperers
The Best Serial Killer Movies Ever Made
What to Know About Tayshia's 'Bachelorette' Cast
Tara Palmeri on Hosting a Podcast for Survivors
It's Been a Weird Year for 'The Bachelorette'
Clare Crawley's 'Bachelorette' Cast Is Out
Honor RBG With These Books & Movies