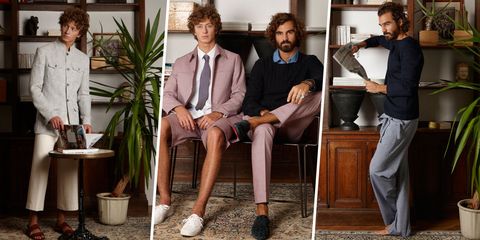 The day it was announced that Beyoncé and her then-unbeknownst-to-us twins would be headlining Coachella, the only other thing that made a significant blip in our inner-office communications was John Malkovich's new menswear range.

"Like, I just love that of all people HE made a clothing line, and frankly, I love it," said culture editor Mehera Bonner, before rapidly sending me links to rib-knit cashmere cardigans and little seersucker suits she might like to own. (SAME.) Then we digitally squealed over the Gallic-yacht-club mood of the spring lookbook, while Mehera reconsidered being "married to a man who wears NY Rangers shirts," her words, not mine.

For a celebrity fashion effort, Malkovich's impressively edited collection is much better than it needs to be, sort of like how The Row exceeded all expectations simply because we might not give actors and their auxiliary talents quite enough due. And there is something Olsen-like about his trim, square-neck fisherman's sweaters, tapered trousers (made for wearing with Common Projects), and $600 workman's jackets.

But unlike the twins' subdued PR strategy, in which their brand Instagrams are more furniture than clothes, Malkovich has gone and shot a shout-y, irreverent Super Bowl ad for Squarespace, which hosts his website. (Spoiler: He got the domain name.)

"We first worked with John while producing a 2016 project called Playing Lynch," said Squarespace CCO David Lee. "It was here that I learned about John's real passion for design, and in our campaign, we worked with him to bring that passion to life in an e-commerce site for his fashion line. We wanted this campaign to reflect the challenges that come along with pursuing your passions, as well as the triumph that can be achieved."