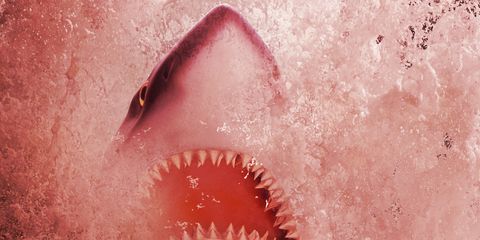 Shark Week is a glorious time in which many of us get to feel particularly in tune with the wonders of nature. But despite having years to get used to it, most people who get to enjoy Shark Week also have a lot of questions about it. To put some of them to bed, we've decided to use the occasion of Shark Week on Discovery to answer some of the most pressing questions you might have about your own personal Shark Week.

You're an apex predator—you deserve all the answers.

How long does Shark Week last?

Typically less than 8 days. It can be longer or shorter depending on a variety of factors (birth control, anemia), and if you’re concerned or notice something that’s not normal for you, you should have a chat with your doctor about it.

When is the next Shark Week?

The average distance between two Shark Weeks is 28 days, but anywhere between 21 to 35 is normal. According to the Center for Young Women's Health, your birth control may make that time frame longer or shorter (it might even cause you to miss Shark Week altogether).

Because the ideal boyfriend is smooth, slippery, and dangerous. (No? Just me?)

But feeling hornier than usual during Shark Week is totally normal, even if science isn’t quite sure why it happens. See, Shark Week involves a lot of hormones—progesterone, estrogen, testosterone—all of which can alter your sex drive. Estrogen, for example, spikes during the first few days of Shark Week, which means you might get extra turned-on in those few days. Plus, according to Women’s Health:

“During and right after the period is when progesterone”—the hormone that suppresses your sex drive—"is the lowest,” explains [Adeeti Gupta, M.D., an ob-gyn and founder of Walk In GYN Care]. Meanwhile, your desire-boosting estrogen levels are building up, making a case for increased horniness.

So just enjoy it! We even compiled a list of ways to make Shark Week sex some of the best sex ever, which you can find here.

Why is it called Shark Week?

Because you’re bleeding, I guess? I like it as a moniker because it’s funny and sharks are my favorite animal so I dig the comparison. That said, I’ve heard others suggest that it’s kind of an objectifying nickname for that time of the month, and yet another signal from a patriarchal society that women’s natural body processes are something to be feared and mocked.

My two cents? I think we can, as a culture, normalize Shark Week without taking away all the fun of it. But do what works for you!

What happens if I skip Shark Week?

There are a ton of reasons you might be late to Shark Week—and not all of them mean you’re pregnant. For example, medications for thyroids or steroids can cause Shark Week to arrive late, as can stress, excessive exercise, or even just a big change in routine. Of course, if you’re concerned, you should make sure to take a pregnancy test or consult your doctor.

Am I more likely to be eaten by a shark during Shark Week?

Probably not. Though there’s the old saying about sharks’ ability to smell blood up to a mile away, not only is that not true (it’s more like a quarter-mile), but it also doesn’t really apply to human blood. According to marine biologist Dr. Tricia Meredith, cited in this Broadly article on the subject, sharks are great at smelling but not better than a lot of other fish with similar nose structures. Instead, they’re really talented at sensing electromagnetic fields, and since your Shark Week blood isn’t any more conductive than a lot of other stuff—and sharks aren’t that into the taste of people anyway—you’re probably not more likely than any other time to be eaten by a shark.

Reminder: The probability of getting attacked by a shark, at any time, is 1 in 3,748,067. You’re way more likely to die from a fireworks disaster. So you should relax and also maybe avoid fireworks.

What does President Donald Trump think of Shark Week?

He’s against it, whether you’re talking about animal conservation or menstruation. The President is responsible for the most catastrophic rollbacks to existing protections on endangered animals and ecosystems in modernity—all in favor of sucking up to his would-be buddies in the oil, gas, and mining industries.

As far as your period is concerned, he thinks it makes blood come out of your wherever. Honestly, he just doesn't seem to like women that much.

If you want to help protect endangered species, you can donate to the World Wildlife Fund by following this link.

The other Shark Week—the one with eight days of programming around everyone’s favorite biting fish—kicked off on Discovery on Sunday, July 22, and runs through Sunday, July 29.