Back in May, Kim Kardashian posted a photo on Instagram of herself eating a red piece of candy that she described as “literally unreal.” The #ad, broadcast to her 111 million followers, promoted a company called Flat Tummy Co., maker of weight loss products, including meal replacement shakes and the appetite suppressant lollipops Kardashian was hawking in her sponsored post.

The fact that a woman with so many young eyes tracking her every move was essentially encouraging fans to stop eating—by way of shilling a product marketed to impact health but that’s never been approved by the FDA—induced much ire in the direction of Flat Tummy Co., from celebrities and fans alike. Critics argued that the company's policy of using influencers as advertisers was creating unrealistic standards and encouraging unhealthy dietary habits—the kinds that can lead to eating disorders and anxiety. That anger intensified in July, when a giant billboard appeared in Times Square telling girls who were craving food to “suck it” instead.

Eating disorders are a very real issue for a lot of young people and to see Kim Kardashian actively encouraging her fans to develop an unhealthy relationship with food is terrifying and gravely concerning. pic.twitter.com/hhFYBbm8hL

Of course, people have been giving advice on how to stave off weight gain since at least as early as the 11th century, when a guy named William the Conqueror decided to consume nothing but alcohol. Since then, a number of iconoclasts ranging from Andy Warhol to Elvis Presley have sworn by specific ways to stay trim. But never before have celebrities and brands had the ability to telegraph their dubious advice on dieting into the phones of millions of impressionable young people at once.

Flat Tummy Co is undoubtedly ahead of the pack in that arena: When the company was sold by two Australian entrepreneurs to a consumer healthcare corporation in 2015 for a whopping $10 million, one of the reasons supporting the hefty price tag (cited in a press release) was Flat Tummy's algorithm, which it uses to find and target people who will follow the company on Instagram.

It seemed no one had bothered to investigate what Flat Tummy Co. is actually selling, other than outrageous expectations and candy.

I’ve made sporadic efforts to lose a pound or two throughout my life, but I’ve never tried a diet or cleanse or anything I would consider drastic. But I grew curious about the pops after observing the outrage cycle around Kim K’s post—not because I wanted to slim down, but because I wanted to know if the product even did what it said on the label. For all the people getting mad about it, it didn’t seem to me that anyone had bothered to investigate firsthand what the company is actually selling, other than outrageous expectations and candy.

My intrigue increased when I opened the company’s website. A chat window immediately popped up, calling me “babe” and imploring me to ask questions as I clicked through a millennial-pink layout. As far as appearances go, Flat Tummy Co. was designed in the same lab as Glossier—one with an obvious intention: Convince twentysomething women to buy things.

Rather than chat with a bot, I checked out the company’s FAQ section for myself. I learned that drinking the company’s tea (on top of its supposed weight-loss benefits) might have the added bonus of helping me “go to the bathroom.” That fun tidbit didn’t appear in the lollipop section. The secret ingredient in Flat Tummy Co.'s candy is not a laxative, but instead something called “Satiereal,” or saffron extract, which was patented in 2012 and is supposed to decrease users’ snacking habits by affecting their serotonin levels. On the website for PL Thomas, the company that supplies and markets the ingredient, an eight-week, double-blind study from 2010 is touted as evidence that it works: Out of the 60 women in the study, 31 who took two Satiereal capsules per day experienced decreased food intake compared to those who took a placebo. A much more recent study from January of this year states the opposite. After 28 days of taking Satiereal capsules, 10 participants “did not have any detectable beneficial effects on body-weight management,” over those who received a placebo instead.

So which is it? Given the limited data, I figured the only way to get to the bottom of whether the pops worked was to place an order for a set of 30 of them (supposedly enough to last two weeks) and see for myself.

First things first: I called up registered dietician Laura Cipullo, who helped me parse the minimal research on Satiereal. I wanted to learn how much of it I would need to consume to feel any effect...and to make sure I wasn’t missing a line in the FAQ that portended violent illness. Helpfully, she noted that the women in the study who claimed the ingredient was effective had consumed 176.5 mg of Satiereal per day, so I needed to consume at least that much for my experiment. The pops packaging includes no info on quantity.

Against my earlier wishes, I was forced to interact with the Flat Tummy Co’s chat function. “READY TO START YOUR FLAT TUMMY MISSION?” the site’s bold lettering shrieked as I logged on, right before I was informed via a second pop-up that “Another babe in Surrey, Canada just ordered Ultimate Flat Tummy Bundle.” From the customer service rep on the Live Chat, I was told that each lollipop contained 88.25 mg of Satiereal, which meant I would need to consume a couple of lollipops per day to mimic the study.

So I ate a few of the lollipops, and they tasted...fine? The first one made my stomach clench a bit, but I think it was just dread that something bad might happen (though one of the studies did suggest the pops could have a laxative effect). My fiancé, who is less of a hypochondriac, said they had kind of a weird taste, but as I observed, that did not stop her from finishing a watermelon-flavored one.

“We hypothesized that saffron would improve mood, hence reducing snacking and the desire to eat,” reads one of the studies on Satiereal. “Modulating abnormal frequent snacking might subsequently contribute to a better control of body weight; and, by having a positive effect on stress and mood, saffron could be an adjuvant supplement for people who are involved in weight loss programs.”

The non-scientific translation of this, I’m fairly sure, is that even weird-tasting candy tastes good, and once you snack on something that contains calories, you become less hungry. Revolutionary stuff.

Overall, I think the main dietary benefit of a lollipop—whether or not it contains “appetite suppressant” chemicals—is that it’s literally a plug for your mouth, and it’s hard to consume anything else when your mouth is filled with an endurance candy that takes a long time to whittle down. Still, if I was really hungry and needed a snack midday, I would rather eat, say, a banana, which at least also provides me with nutrients, than consume 35 calories worth of cane sugar.

“The study suggests that the lollipops would be helpful for people who are more emotional eaters, or people who get nervous and then they eat,” Cipullo agreed. “But there needs to be more than one research study available to determine if even that is true.”

What is undoubtedly true is that spending $36 on lollipops is bonkers, and seeing that number on my receipt after the trial made me feel sicker than the Satiereal did. This is not a product I would recommend in good conscience, but I would at least, theoretically, be able to earn my money back if I were willing to sing its praises. You see, Flat Tummy Co. has a brand ambassador program in which customers are sent $10 for every “babe” they convince to place an order. Kim Kardashian is an ideal celebrity spokesperson for a company that wants to sell young girls on unhealthy diet advice, but I’d be interested to know how many regular people end up actually buying these lollipops more than once. My guess is that, more than any reality star’s endorsement, Flat Tummy Co’s success may rely on girls selling each other these candies to get commission once they decide they’ve wasted their own money. 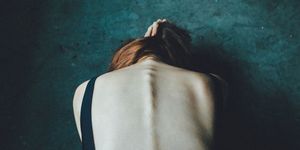 How I Kicked My Dependence on Laxatives for Good
This content is created and maintained by a third party, and imported onto this page to help users provide their email addresses. You may be able to find more information about this and similar content at piano.io
Advertisement - Continue Reading Below
More From Health & Fitness
What It's Really Like Living With Chronic Pain
Sloane Stephens Opens Up About Mental Health
Advertisement - Continue Reading Below
I Was Ashamed to Tell People I'm an Egg Donor
Yes, You Should Be Taking a Probiotic Every Day
Simone Biles Has Exited the Gymnastics Team Final
Olympian Raven Saunders Gets Another Shot at Life
The Cost of Chronic Pain
What It’s Like Living With An Invisible Condition
I Used to Imagine Murdering the Men I Dated
The Best Workout Apps for Women Who Want Results