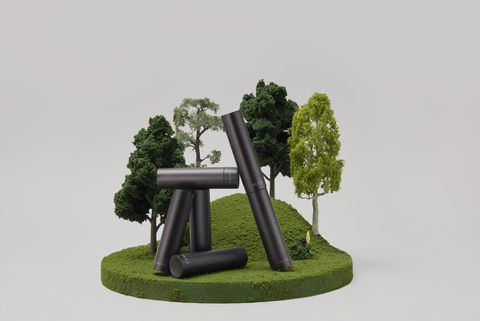 Lately, I've been trying to be a little greener. For me and for most of the people I know, reducing our carbon footprint by driving less, avoiding fast fashion, recycling, composting, and eating less meat has been top of mind in recent months. Which is why I’m slightly ashamed to admit that, though I was sort of aware that single-use tampon applicators were probably polluting the environment, I mostly avoided thinking about the fact that I was throwing away this non-recyclable piece of plastic several times a day, for nearly a week, every single month. I mean, really, how bad could the impact be?

Well, it turns out it's pretty bad! Of the $1.1 billion of tampons sold every year, nearly 88 percent of them have plastic applicators, according to Mother Jones, citing research from Kotex. And those applicators don’t break down once they’re in a landfill (or worse, in the ocean).

Sure, you could use a cup (some people swear by them!) but for me, old tampon-using habits die hard. So I was really excited when Thinx—makers of the period-proof underwear that I am unexpectedly obsessed with—released a reusable applicator this week.

Called re.t.a. (for “reusable tampon applicator”), the product is made of medical-grade silicon and has been cleared be the FDA. It’s also surprisingly chic! It’s made of three pieces that all detach and can be cleaned individually—a silicon part that you insert called the holder, a black peg that pushed the tampon through the holder, and a spherical cap.

You put any applicator-less tampon (like these Cora one, which cost a mere $6 for 18 of the regular-sized) into the holder, assume the tampon-insertion position, and push the peg up. That’s it. Cleaning when it’s in use consists of disassembling the three parts and washing them thoroughly with unscented soap, then letting it air dry. Between periods, you soak it in boiling water and then clean it off with rubbing alcohol.

I got a Thinx re.t.a. of my own to try and, as a smug conservationist, I am thrilled to announce that I love using it. It glides right in, is super easy to clean, and is a lot more comfortable than a cardboard applicator. And, of course, it’s way more environmentally-friendly than the plastic glide applicators I used to prefer.

Honestly, it's amazing that we don't talk more about the environmental impact of standard tampon applicators. According to Design Life-Cycle's handy guide to the life of tampons, it can take centuries for a single-use applicator to decompose—and that's not even talking about the sheer amount of crude oil and energy it took to produce the damn thing. Break those numbers down into the billions of tampons being used each year, and we have a major environmental crisis on our hands.

This green alternative isn't exactly cheap—re.t.a. retails for $60 on the Thinx website—but consider that you'll save on the slightly higher price of tampons with applicators, and that it lasts two years with proper care. Most importantly: You’ll be potentially cutting down on 58 percent of period waste by going applicator-free. It feels like a good investment.

Related Stories
You Should Volunteer For A Political Campaign
Meghan Markle Made This Ring Style Super Popular
Lip Balms That'll Heal Your Dry, Chapped Lips
This content is created and maintained by a third party, and imported onto this page to help users provide their email addresses. You may be able to find more information about this and similar content at piano.io
Advertisement - Continue Reading Below
More From Health & Fitness
Power Pick: SoulCycle's At-Home Bike
Yes, You Should Be Taking a Probiotic Every Day
Advertisement - Continue Reading Below
The Best Workout Apps for Women Who Want Results
Pilates Mats for Crushing Your Fitness Goals With
Our Favorite Yoga Apps for Beginners
Stress-Relieving Gifts That Will Put You at Ease
How Do We Find Joy Again?
Dr. Fauci's Advice for Keeping Your Immunity Up
How to Build a Mini Gym at Home
Transitioning in the Age of Zoom