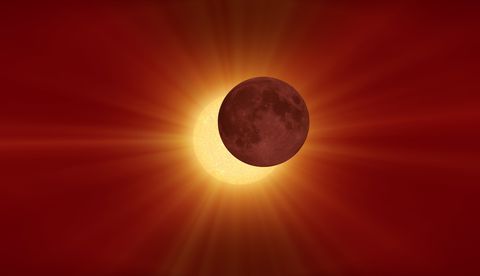 In ancient times, women whose periods were in sync would go into a menstrual hut or "moon lodge" and sit together and bleed. As the name suggests, these all-female hangouts tended to coincide with the full moon. Over thousands of centuries, astrologers have maintained that the movement of celestial bodies has significant power over our thoughts, feelings, and yes, our bodies.

Before you file this in your Old Wives' Tale folder, ask yourself this: Has your period been weird lately? Because a lot of women have mentioned to me that theirs is. And it just might have something to do with the total solar eclipse occurring today, when the moon will completely cover the sun for close to a full three minutes this afternoon.

"This cycle has been longer and heavier and I couldn't pinpoint why—even my husband has noticed my PMS symptoms are worse this week."

"My period's literally been like clockwork for years, but for the last month it's been bizarre," Tamar Lesnoy, 29, told me when I asked. "Never in my life has that happened."

Gigi Engle, 26, whose period is regulated by her birth control, seconded the weirdness. "Since I got my IUD, I don't bleed, I only spot, but my cramping this past week has been unreal—like so intense that I feel like I have to breathe through them like contractions and down fistfuls of Advil," she says. "I finished my cycle last week, but starting yesterday I've been experiencing terrible cramping again. I almost thought I had PID [pelvic inflammatory disease], and then I saw the solar eclipse was here and knew my body was likely reacting to it."

Meg Constantino, 34, is also experiencing strange changes: "This cycle has been longer and heavier and I couldn't pinpoint why," she says. "Even my husband has noticed my PMS symptoms are worse this week." Does she think the eclipse is playing a role? "As a believer in holistic medicine and universal alliance, I wouldn't be surprised if atmospheric changes could be causing the drastic difference in my menstrual cycle."

Science is pretty silent on this topic—the OB/GYNs I consulted couldn't attest to whether our cycles could be impacted by anything outside of what's happening in our own bodies. But the fact is, not much research (AKA funding) is dedicated to discovering if this type of a connection exists. So I kept digging.

What also happens during the solar eclipse? A new moon cycle begins. Bingo! "We tend to feel the strongest pulls during the full moon, which may result in heightened emotions and feelings of heaviness on a physical and energetic level," says Allison Walton, women's health and integrative nutrition specialist in Richmond, Virginia. "Think about the power of the moon's gravitational pull on the tides. Now imagine what that may do to our body as well."

"Think about the power of the moon's gravitational pull on the tides. Now imagine what that may do to our body as well."

The Earth is at its most fertile when the moon is full, which is the result of the Earth receiving additional light for the plants from not only the sun during the day, but also the moon's light at night. "Traditionally, the new moon is associated with menstruation, when a woman's body is shedding, releasing, and bleeding," explains Walton. "Known as the White Moon Cycle, it's a time to deeply nurture and honor the body, allowing plenty of space to restore."

Related Stories
S.O.S.: How to Get Rid of Cramps Fast
Why Investing in Women\'s Health Technology Matters

The lunar month is about 28 days, which is also around how long it takes for a woman to complete her menstrual cycle. A menstrual cycle has four phases: menstrual, follicular, ovulatory, and luteal—just as the moon does: new moon, waxing moon, full moon, and waning moon. The luteal phase, or the phase leading up to menstruation when estrogen and testosterone levels dip, is "usually the most difficult phase for women, where nesting and restoring is a priority," adds Walton. "The luteal phase is also notable for symptoms of moodiness, bloating, and headaches." Meanwhile, the new moon, which, I repeat, is happening today y'all, will cause "many people to experience heightened emotions," explains Walton.

Astrologer Colin Bedell, founder of Queer Cosmos, agrees that there's more to these simultaneous phases than meets the eye. "According to the metaphysical tradition, the new moon cycle, which is what the solar eclipse is, is the perfect time for the woman to begin menstruation. Women are going to feel the urge to clean house—that's what the hormones are doing. It's a total release."

This article has been edited to correct "full moon" to "new moon" in the 9th paragraph.