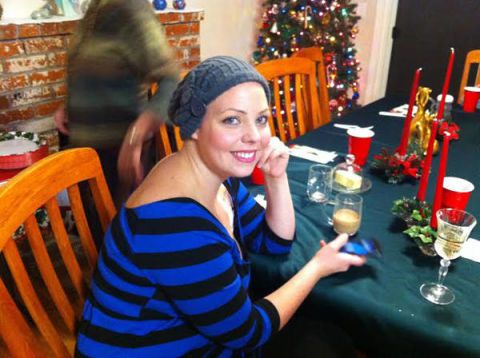 It was a hungover morning in Las Vegas when Kathryn McPeake noticed a lump in her chest—again. "I had just gotten my hair back and was feeling pretty," she remembers of that day in 2012.

In the year and a half since being declared lymphoma-free, the 32-year-old had slid back into her life with gusto, launching her own business and going out with her friends. But when she returned to San Jose, CA, the doctor confirmed her fears: she had relapsed. It was a nightmare scenario—a realization of a nagging fear that occupies the thoughts of most post-treatment survivors for the rest of their lives.

Overshadowed by a focus on recovery through the months or years of chemotherapy and medical procedures, the aftermath of being declared cancer-free can be unexpectedly harsh. In the year following treatment, survivors say they're unprepared for the reality that dawns instead of the expected bounce back into "normal" life. There are the long-lasting side effects, dismissal and isolation from family and friends, financial burden, and constant anxiety that sickness could return. Finishing treatment, they find, is just the beginning of lifestyle adjustments and reevaluated priorities that fall into place in the post-chemo year.

"It's almost like you're holding your breath through treatment and then, after, you breathe and everything else comes to the surface," McPeake says. Suddenly, survivors find the help from their friends and family drops away. "I was almost bothered when people were like, 'Congratulations, you're done,'" she adds, because for her it felt like just the beginning. The dismissal made her hesitant to ask for continued assistance from people who already helped so generously during treatments.

"Once you hit the 'you're-cancer-free' mark, you're kind of forgotten about," says Traci Brundage, a 29-year-old mother of two who finished treatment for triple-negative breast cancer in February 2013. "People say, "Move on...why do you keep bringing it up?'" she says. "I can't snap my fingers and be back to who I was."

To battle the isolation and find the help she felt she needed, Brundage, who lives in Utah, started an online survivor's support group one month after finishing her last treatment. "It's a club you don't wanna join, but the bond is unbreakable," she says. The Facebook page now boasts 150 members across 20 countries, and they delve into topics not covered during a doctor's appointment, from battling depression to the foods you should or shouldn't be eating to an ever-changing physical appearance. "Yes we're alive and supposed to be grateful for it, but it hurts," she says of post-chemo ailments.

The lack of preparation for these after-affects isn't the doctors' fault, McPeake says. '"They're just there to cure cancer, and once the cancer's cured you almost don't want to tell them about problems you're having."

The first time around, McPeake had eschewed support groups, but secluded by a weakened immune system after her second remission, she joined two on Facebook. "A big thing we talk about is how stupid we are," she says of her fried mental capacity known as "chemo brain." For a few weeks after treatment, she sought professional help. "I don't really have anyone to talk to so I just come here to hang out," she told the therapist. She wasn't there for the medication, hoping to avoid the pill after pill she'd seen her survivor friends take.

For younger breast cancer victims it's especially hard, Brundage says, because the diagnosis is associated with a later generation. "I think there's a lot more support for older women than for us," she says. "I think they think we think we're invincible, but cancer brings us to our knees." Due to her treatments, she's since been diagnosed with degenerative arthritis, vascular disease, and neuropathy, an ailment in which your hands and feet go numb that affects many survivors. She's also unable to have more kids, which she had hoped to. Many women suffer early onset menopause triggered by the chemo.

But it's her young son and daughter who've kept her focused on making it through year one as the anniversary of her remission approaches. "Thank heavens for children when you go through crazy things like cancer," she says. The moments she hears them laughing instead of fighting makes the days easier to get through.

Though it can be a difficult return, transitioning back into a routine of hobbies and work is a lifesaver post-cancer, McPeake says. A brutal 6 month slump when finishing her second round of treatment was overcome by focusing on things she loves to do: taking jewelry making classes and furniture design at the local community college and spending more time with her 10-year-old daughter.

"We don't know how much time we have or what kind of time we have, thats why every moment is so important," says Daniel Bachove. That's why this past New Year's Eve, less than one month after the 36-year-old finished his last dose of chemotherapy for stage 4 small bowel cancer, he celebrated in the best way he thought possible: he got married.

Just days after leaving the hospital, the 36-year-old and his fiancée crammed the normal months of wedding planning—securing a venue, dress, DJ, photographer, and cake—into three weeks. Unexpected donations meant Bachove didn't have to cut corners for his fiance Mindy just because of the strain cancer put on their finances. "I want her to have a real wedding, not something to look back on and say, 'Because I had cancer we couldn't do this and couldn't do that.'"

For now, though, a honeymoon is out of the question. The crippling toll cancer takes on finances, even with insurance coverage, bears down after treatment when survivors finally have time to survey the damage to their bank accounts. McPeake, despite having a government job and insurance, owes more than $10,000 in medical collections. Even the little costs add up, like wigs and hats, travel costs for treatment, and babysitters.

Now that he's danced at his wedding, Bachove is ready to start figuring out his next chapter in New Jersey, and is itching to get back to work where he, in a bit of twisted irony, raises awareness for rare diseases. "I got used to a life of treatments every other week," he says. "It's kind of like being released from jail. You are incarcerated when you have chemo, everything stops."

Survivors live with a nagging anxiety every time an ache or pain creeps up. During the first year after cancer, patients return to the doctor around every three months for scans. "You talk to anyone in first-year remission: you are sick with worry, sick with anxiety, sick with terror," Brundage says. But the nerves build an appreciation for having made a recovery in the first place. "Every day means a little more—you don't take life for granted, you just take every moment and treasure it."