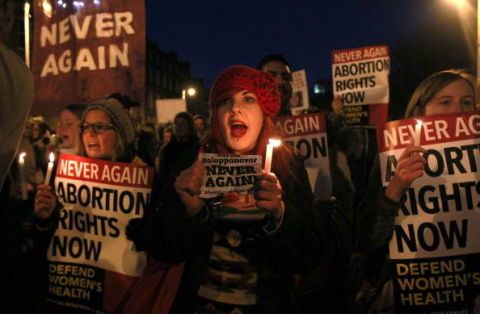 A new study from the Guttmacher Institute found that the abortion rate has dropped to its lowest point since 1973, possibly due to increased use of effective contraception.

Earlier this year, the Guttmacher Institute released a study that found that 2013 was a dismal year for abortion rights, as more state-level restrictions were enacted between 2011 and 2013 than in the entire previous decade. While researchers did not study the reasons for the abortion rate dropping, they did suggest that the decline could have something to do with the prevalence of effective contraception.

In an interview with The Huffington Post, Rachel Jones, lead author of the study, said, "Contraceptive use improved during this period, as more women and couples were using highly effective, long-acting reversible contraceptive methods, such as the IUD. Moreover, the recent recession led many women and couples to want to avoid or delay pregnancy and childbearing." Jones said that the study also coincided with "a steep national drop in overall pregnancy and birth rates."

With the Affordable Care Act, health insurance providers are now mandated to cover birth control. Some birth controls are offered for free and without co-pay, some are not. To learn more about how to access insurance-covered contraception, head over to healthcare.gov.

This content is created and maintained by a third party, and imported onto this page to help users provide their email addresses. You may be able to find more information about this and similar content at piano.io
Advertisement - Continue Reading Below
More From Health & Fitness
Stress-Relieving Gifts That Will Put You at Ease
My Tarot Card Dependency Controlled My Life
Advertisement - Continue Reading Below
How Psoriasis Impacts Young Women’s Careers
Yoga Mats You'll Love, According to Yogis
Friendship, Infertility & Moving Forward
Changemakers 2021: Working Toward Wellness
Frida Mom Ad Shows the Struggles of Breastfeeding
Considering Changing Up Your BC? Read This First.
Created for From Marie Claire for Created by Marie Claire for
Twirla
Texas DV Shelter Destroyed by the Winter Storm
What We Know About the B.1.1.7 Variant