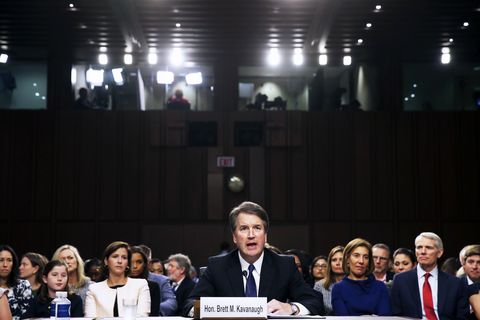 There are a whole slew of reasons why you might not want Judge Brett Kavanaugh on the Supreme Court. For example, the fact that he holds the view that presidents can't be indicted and yet was hand-selected by a president who is under special counsel investigation—a position Kavanaugh seemed to purposefully avoid answering for during this week’s hearings. Or perhaps it’s his extreme unpopularity, with some polls (like this ABC News/Washington Post one) finding more people opposed to his confirmation than for it. CNN notes that no nominee for the Supreme Court with this low an approval rating has ever been confirmed in the modern era.

Or perhaps it’s because you don’t want a 53-year-old, conservative white male to potentially cast the deciding vote on whether or not you get to make decisions about your own body. And now we can add another reason to think he’s a bad choice for the Supreme Court: In answer to a question posed by Senator Ted Cruz, Kavanaugh referred to birth control as “abortion-inducing drugs.” See the exchange here:

The question is in reference to a case called Priests for Life v. U.S. Department of Health and Human Services, in which Kavanaugh wrote a dissent in favor of employers who wanted to deny their employees’ access to birth control without a co-pay. It’s kind of nitty-gritty, but here’s the line where Kavanaugh shows his real opinion on the issue of women's reproductive health: “Filling out the form would make them complicit in the provision of the abortion-inducing drugs that they were, as a religious matter, objected to.”

First of all, birth control is not an abortion-inducing drug, and it’s worrisome that the guy who could decide the future of Roe v. Wade might not understand that. Second, for all the claims from the right that fears of Kavanaugh overturning Roe are just histrionics, this is a very telling slip.

According to the Guttmacher Institute, the difference between birth control and abortion was actually laid out in an amicus brief submitted to the Supreme Court in 2013, explaining that "a contraceptive method by definition, prevents pregnancy by interfering with ovulation, fertilization, or implantation. Abortion ends an established pregnancy, after implantation." This scientific definition of pregnancy is also the legal definition, says the Institute, and has long been accepted by federal agencies, even in administrations that generally oppose abortion. Kavanaugh's apparent failure to understand this means he not only has a poor grasp of reproductive health terminology, but a poor grasp of the law that guides it. Again, this is the guy who may get the final say on Roe v. Wade.

A protester during day one of the Kavanaugh hearings. Over two days of hearing more than 140 protesters were arrested.
Mark WilsonGetty Images

“It’s no wonder Kavanaugh’s nomination has been met with unprecedented protests. Kavanaugh referred to birth control—something more than 95 percent of women use in their lifetime—as an ‘abortion-inducing drug,’ which is not just flat-out wrong, but is anti-woman, anti-science propaganda. Women have every reason to believe their health and their lives are at stake. Kavanaugh has made clear over and over again that he would not uphold women’s ability to access reproductive health care as a constitutional right. Let me break it down for you, Brett: birth control is basic health care. Birth control allows women to plan their futures, participate in the economy, and—for some women with health issues like endometriosis—allows them to get through the day. It is clear from Kavanaugh’s record and answers that his nomination puts access to affordable birth control at risk.”

If Roe v. Wade is important to you, there’s still time to stop the confirmation of Brett Kavanaugh. Most immediately, you should contact your Senator and tell them you want them to oppose Kavanaugh’s nomination. You can head over to Whip the Vote, which will not only put you in touch with your representative, but also sends you to Indivisible, which has provided handy scripts for you to read from based on whether you're represented by Democrats, Republicans, or pro-choice Republicans (as is the case for those in Alaska who are represented by Senator Lisa Murkowski, or in Maine who are represented by Senator Susan Collins).

You could also show up to a protest and make your voice heard. If you’re near the Capitol, there’s an entire SCOTUS Week of Action that you can RSVP to here.

Related Story
If Kavanaugh Is Confirmed, This Could Happen
This content is created and maintained by a third party, and imported onto this page to help users provide their email addresses. You may be able to find more information about this and similar content at piano.io
Advertisement - Continue Reading Below
More From Politics
Daunte Wright's Death Sparks Protest in Minnesota
41 Surprising Rules First Ladies Have to Follow
Advertisement - Continue Reading Below
Asian American Women on Where to Go From Here
Syrian Journalists Reflect on a Decade of War
How to Show Your Support for the AAPI Community
Activist Lydia X. Z. Brown on Disability Justice
Elisa Crespo: "I'm Not Here to Make History"
What We Know About the Georgia Spa Shootings
Dianne Morales Has Never Listened to the Naysayers
Stacey Abrams on Her Definition of Success