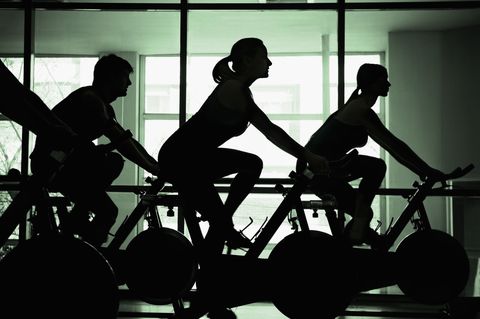 It's 7 a.m. and I'm wearing glowstick bracelets. My feet are clipped into pedals and I'm surrounded on all sides by other groggy people not particularly looking forward to turning the knob another click to the right—but knowing they'll feel good about it when they do. We're in a basement that sounds like a club and a man in rainbow spandex is shouting and running up and down the narrow aisles. This is spin class, and by the end, I'm somehow practically in tears.

Stephanie Dietz, a spin instructor at Cyc Fitness in Madison, Wisconsin, often sees riders get teary-eyed toward the end of class. "The entire road trip is a mental escape from reality," she says. "By the end, people feel a rush of energy that's a release of emotions." Part of it is the music, she admits—the rise and swell tends to mirror our emotional peaks and valleys—as well as the spin-instructors-cum-life-coaches, but there's something else at play here.

I live in a place where women who don't lean in from every angle feel like they aren't living up to expectations: For many, that means being the perfect professional, partner, and parent—and striving to look like a supermodel across all categories. When I scan the class at 7 a.m. or 7 p.m., one thing is usually consistent: There are mostly X chromosomes in the room, and their owners are very clearly in a hurry to get in and out.

These women wear expensive studio-brand gear and Lululemon before slipping on luxury denim in the locker room. They can afford to drop up to $40 on an hour of guided exercise—but they are time poor: The 60 minutes they spend spinning might be the only connectivity break they get all day. In short, this isn't exactly an all-day namaste crowd: It's the stretched-thin bunch who have too little time to themselves.

"We can change right here, right now!" my instructor shouted.

riders to push through their mental boundaries and break new ground. In a recent SoulCycle class, the instructor (appropriately named Sunny and flawlessly rocking bright red lipstick while spinning out hundreds of RPMs) coached riders through the final moments. "Every day you have choices to make," she cajoled from her bike at the front. "So what are you going to choose right now, in this room?"

This concept is at the emotional gooey center of the spin-class-as-catharsis phenomenon. Permission to really "go there" is moving.

Which isn't to say there's not a physiological component to the spin-weep as well. Exercise stimulates endorphins and serotonin, which create a sense of release. "In spin class, you're inducing stress in the body to the point where you can have a release," Smiroldo-Khanna says. "We're kind of made in a way that our emotions are connected to our body movements."

Jessalyn Gliebe, a Cyc New York City instructor, thinks it's a powerful tool. "Women who need to always be strong, to keep up that face at work and be taken seriously, who can't cry at their jobs…that's another reason we need something we can feel good about, where we can completely release emotion and the feelings we're holding on to," she says.

On a recent frigid night, following another day of stacked deadlines, I took what I'd learned to the spin studio for the final class in my field study. And despite having pulled back the curtain, I still bought completely in. "If you want permission to change, you can't wait," my instructor shouted. "We can change right here, right now!" The room buzzed with energy while riders mopped their faces with towels—sweat or tears, it was impossible to tell.

What Your Weird Sleep Schedule Is Doing to Your Body