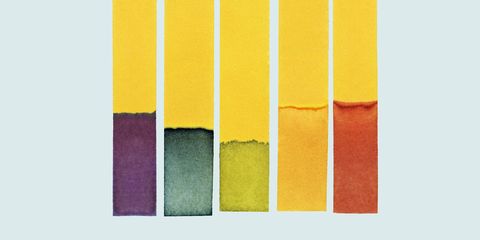 With, I like to imagine, a toss of her supermodel hair and a lissome repositioning of The Body, Elle "Patient Zero" Macpherson told the London Evening Standard she keeps a urine tester kit in her purse to "check that I'm in an alkaline state." That was in April. Earlier this month, Kelly Ripa had her life changed and pain managed by some unnamed but ostensibly low-acid food, which she was permitted to eat in abundance.

"What are those two—but mainly Elle—*even* doing?" you might ask. "Do I have to carry pH strips to dip into my pee too? And does that kit include a Bunsen burner?" Dunno, no, and maybe the deluxe one, but it is a fact both of them are on some form of the alkaline diet, a buzzy nutrition plan/lifestyle Victoria Beckham, Gwyneth Paltrow, and Jennifer Aniston reportedly also follow.

The conceit is that everything you eat either raises or lowers your body's pH levels and that ailments such as osteoporosis, heart problems, back pain, and kidney stones can be blamed on ingesting too many acid-forming foods. Typically, proteins, starches, grains, caffeine, dairy, and alcohol are categorized as acid-forming, while fruits, vegetables, legumes, and nuts are alkaline or base.

Normal enough, except for the whole "hang on, I need to go monitor my excretions" thing. While science says it is possible diet could change your urine's pH, that doesn't really indicate a whole lot about your overall health—at least not before we have more information. At the moment,the American Institute for Cancer Research says "altering the cell environment of the human body to create a less-acidic, less-cancer-friendly environment is virtually impossible," which is a gentle, scientific way of saying "this concept doesn't make sense."

However, if you *still* want to tell people you're on a trendy, celebrity-touted eating regimen, this isn't the worst choice, given the emphasis on fruits and vegetables. Just make sure you're getting enough protein, iron, and essential nutrients—and that nothing falls in when you're using your tester kit.

Chelsea Peng I'm Chelsea Peng, the assistant editor at MarieClaire.com.
Advertisement - Continue Reading Below
More From Health & Fitness
How to Be More Spiritual in 2020
Sleep Supplements for Sweeter Dreams
Advertisement - Continue Reading Below
31 Must-Have Workout Apps for Women
Are New Year's Resolutions Still a Thing?
Gifts That Will Delight and Destress
Products Every New Mom Will Love
Found: The Best Running Sneakers
Debunking the Dangerous Hymen Myth
The Virginity Testing Crisis
Carpe Diem? YOLO? Here's What a Shrink Has to Say