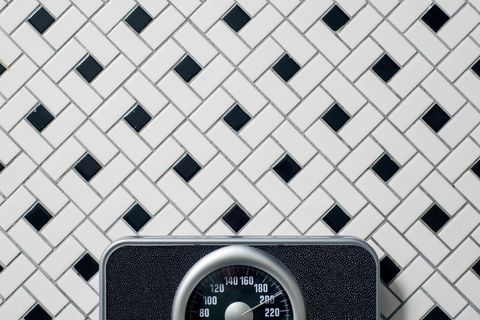 You know when you're really good about going to the gym and paying attention to what you eat and nobody says anything? Turns out, most women don't usually start showing weight-loss in their face until they've dropped about eight pounds, according to a new study.

"Women and men of average height need to gain or lose about three and a half and four kilograms, or about eight and nine pounds, respectively, for anyone to see it in their face," explained Nicholas Rule, an associate professor and Canada Research Chair in Social Perception and Cognition at the University of Toronto who led the study.

But that's not really the worst part. He adds, "They need to lose about twice as much for anyone to find them more attractive." (Did you hear that noise? It's us, groaning/choking back disgust.)

To figure this out, the researchers collected photos of people ages 20 through 40. After altering the images to make it look like the person's weight increased, they asked participants to point out which one looked heavier. They started noticing that the changes are noticeable at a BMI shift of 2.93 lbs/m2and that they noted an increase in attractiveness at 2.38 kg/m2, which translates to about 14 pounds for a woman of average height. (Yes, fourteen freakin' pounds.)

Guys have to work harder to show any change, though. Which is not really an upside, but there's that.

"The difference between the groups suggests women's facial attractiveness may be more sensitive to changes in weight," Rule explained. "This just means women attempting to lose weight need to shed slightly fewer pounds than men for people to find them more attractive."

Kate Storey Esquire Writer-at-Large Kate Storey is a Writer-at-Large for Esquire covering culture, politics, and style.
This content is created and maintained by a third party, and imported onto this page to help users provide their email addresses. You may be able to find more information about this and similar content at piano.io
Advertisement - Continue Reading Below
More From Health & Fitness
Power Pick: SoulCycle's At-Home Bike
Yes, You Should Be Taking a Probiotic Every Day
Advertisement - Continue Reading Below
The Best Workout Apps for Women Who Want Results
Pilates Mats for Crushing Your Fitness Goals With
Our Favorite Yoga Apps for Beginners
Stress-Relieving Gifts That Will Put You at Ease
How Do We Find Joy Again?
Dr. Fauci's Advice for Keeping Your Immunity Up
How to Build a Mini Gym at Home
Transitioning in the Age of Zoom