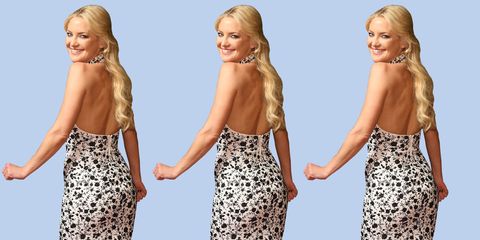 Let's call a spade a spade. Kate Hudson's body is BANGIN'. And if the Fabletics frontwoman's physique has a pièce de résistance, it's her hard-earned, perky-as-she-is derrière.

While there's no denying that her Goldie-grade genetics come into play, Hudson does have a secret weapon when it comes to keeping her backside 💯 . And that's The Booty Belt, a lower-body fitness device that has been hailed "the new Thigh Master" as it does about everything you could possible want to do for the posterior. Firms, tones, tightens, etc....

Invented by Dominick Banks, a personal trainer who works solely with women, the idea was to create at-home-friendly resistances bands (each package includes beginner, intermediate, and advanced options) designed specifically for the glutes, while also helping to tone the ab and thigh regions.

Hudson's endorsement was 100% organic when she first took to Instagram to wax poetic about Banks' creation. And since then many women have hopped on The Booty Belt train...myself included, as of last week.

These days, carving out time to go to the gym daily feels damn near impossible, so I was very intrigued by a use-it-anywhere option—especially one for the bum area. Is it just me, or do the stakes feel higher than ever for a Sir-Mix-a-Lot-anthem-worthy booty? I blame the peach emoji 🍑.

So I hit The Club at Hearst Tower with trainer Carissa Kelemen, who walked me through three different exercises with The Booty Belt. And thankfully she was there, because if I'm being honest, as a rookie I had no idea where to begin when I first unboxed the tangle of multi-colored latex bands.

Hudson's go-to move in her Booty Belt 'gram, it was my favorite of all the different moves because 1) It was a total booty workout and 2) Burned while still feeling feasible for multiple reps. Intended to work the glutes and the core, once you're strapped into the resistances bands (I used the beginner level), you kneel down on all fours, hips over knees, then extend your leg back above your butt. Perform the desired amount of reps (I did eight), then repeat on the other leg.

Toe Touches—no, not the cheerleading kind—didn't come quite as naturally to me as the kick-ups (this might just be code for *they're harder*), but I still appreciated how they worked my glutes and core. Again, you arrange yourself on all fours, but instead of bending your knee, you keep your leg straight and extend it back, dipping it up and down, where the toes lightly graze the floor. I found it reaaaally difficult to keep my leg straight using the beginner bands, so can only imagine the intensity of the intermediate and advanced options. Still, I think it's a great exercise for form and flexibility as well.

For ab twists, you lay down on the mat, then bring your upper body off the floor, crunching towards one side of the body, while bringing your bent knee up near the head. You're supposed to continuously reverse this motion until "muscle failure". LOL.

This was by far the hardest exercise for me, but that's probably because coordination was half the battle. For some reason alternating the twist motion, while trying to keep my folded arms firmly placed behind my head was like, the trickiest thing in the world. But once I got into the groove, it was fine. My abs felt the burn more than my glutes (this move is known for addressing love handles) and it was the most challenging workout, perhaps to a fault, for me.

While exercising with The Booty Belt can be tricky to get the hang of at first, and even the beginner bands are not for the faint of heart (seriously, brace yourself), I'm super excited to have such a portable workout tool in my repertoire. I can't promise that I'll use it regularly as that's just not where I'm at in my life, but at the very least I'll make myself feel less bad about a Netflix binge by multi-tasking with some Booty Belt action.

Lauren Valenti Associate Web Editor I’m the associate web editor at Marie Claire.
Advertisement - Continue Reading Below
More From Health & Fitness
IVF On Hold
How to Donate Money for COVID-19 Medical Supplies
Advertisement - Continue Reading Below
One Nurse’s Week on the Coronavirus Frontlines
How to Have Healthy Convos Around Climate Change
How to Build a Mini Gym at Home
Can't Find a Good Online Workout Class? We Gotchu
What It's Like to Be a Doctor Fighting Coronavirus
The Best Workout Apps for Women Who Want Results
LVMH Perfume Factories to Produce Hand Sanitizer
Why Social Distancing Is So Important Right Now