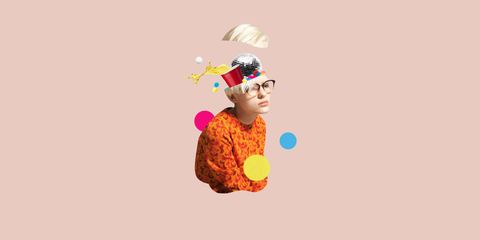 There's an old tune that goes "99 bottles of beer on the wall/99 bottles of beer. Take one down, and pass it around, oh god, how many IQ points will I have dropped by the end of the night?"

For anyone who's concerned about retaining as many brain cells as she can (I NEED THEM ALL) while having as much *fun* as she can (ah, the contradictions of being a woman), the question that serves as this story's headline has probably arisen at some point: "Is that tequila shot lowering my chances of being admitted to Mensa?" I mean, "Is my drinking making me dumber?" which is really a roundabout way of asking "How much can I really get away with?"

Right off the bat, says leading addiction expert Dr. Indra Cidambi, it's not a terribly good omen that you're thinking about it. "It's not cut-and-paste, but if it affects one area of function, then you're already looking at a downward spiral." Meaning that, if a "too-lit weekend" for you exceeds the rather tame-sounding binge-drinking standard of four drinks in two hours, and you're doing this regularly, you might have already started on the primrose path of alcohol abuse, which will, in fact, damage your memory and cognitive function in a way that does make you dumber (!!!). The good news is an occasional blackout doesn't automatically turn you into Blanche DuBois (stop that, tho), and depending on how party-hearty your ancestors were and your own tolerance, the threshold could be higher.

But while there's no one-size-fits-all answer ("seven birthdays, two bar crawls, and three bottles of a big Cab imbibed while watching Bachelor in Paradise"), there is this: Why add Murakami-ing to the long list of other fears women face when drinking? Best to eat, stay hydrated, keep count, and monitor the ol' BAC—for while a hangover lasts 30 days on your face, stupid is forever.