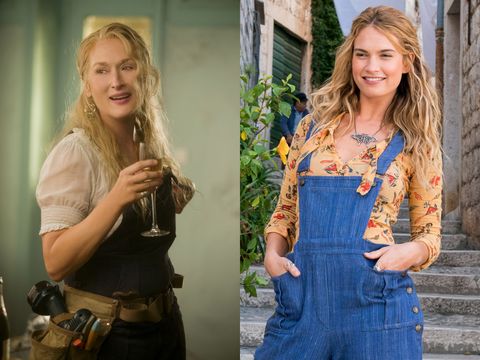 It's been ten years since Mamma Mia! was released in theaters, which is just one more thing to make us all feel very old. This summer, ten years after the original film's release, Universal released a sequel, the amazingly-titled Mamma Mia! Here We Go Again. The big question looming over the long-awaited sequel was definitely: Will Meryl Streep be in it?

Streep played Donna Sheridan, the lead character from both the Mamma Mia! movie and the Broadway musical of the same name. The play/movie, built around the songs of ABBA, centers on a young woman who invites three men, all of whom might be her biological father, to her wedding after finding her mother's racy diary from the summer before she was born. The mom with the racy diary? That's the character Streep played.

When it came time to make the sequel, Streep agreed to appear, but her character wasn't in much of the film—well, at least not the version of the character played by her. Although Streep's character is dead in the present-day timeline of the movie, her character lives on in flashbacks to that fateful summer. Young Donna is played by Downton Abbey and Cinderella star Lily James.

So what's it like taking on a role made iconic by Meryl Streep, perhaps the greatest actress of all time? Scary AF, according to James, who we spoke to about taking on the part.

"That was one of the things that kind of gave me pause," she said when asked what it was like filling Meryl's dancing queen shoes. "I thought, well, 'Can I do this? Is this something that I should risk?' Because it is such a huge task. [But] you can never be like governed by your fear."

James said she watched Streep's Mamma Mia! performance dozens of times in preparation for the part, but she made an effort not to do an exact impression of the Oscar-winner.

"I know every single blink of her eye in the first film and, whilst I wasn't able to—nor did I particularly want to—do an impersonation just because I wouldn't have been able to, but I did feel like I was able to draw on the characteristics of Donna."

Mamma Mia! Here We Go Again is out on blu-ray on October 23.

Related Stories
The First Trailer for 'Mamma Mia 2' Is Here
Cher Returns to Cinema in 'Mamma Mia' Sequel
This content is created and maintained by a third party, and imported onto this page to help users provide their email addresses. You may be able to find more information about this and similar content at piano.io
Advertisement - Continue Reading Below