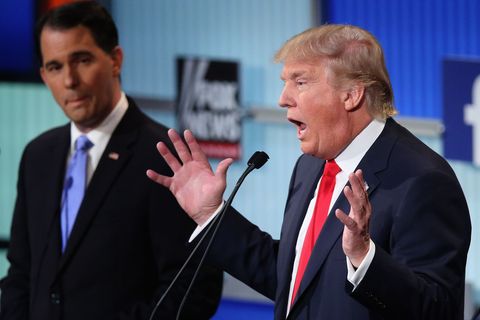 At tonight's Republican debate, Donald Trump emerged as more of a trash-talking pro wrestler than a presidential candidate. Within the first minute of the program, Trump was booed for refusing to promise that he wouldn't run as an independent if he didn't win the Republican nomination (which, if he did, could split the vote and damage the party's chances of winning the office). He refused to pledge his support to a Republican nominee who wasn't him.

But it was moderator Megyn Kelly's first question that really got things going. Kelly accused Trump of having called women "fat pigs, dogs, slobs, [and] disgusting animals" and Trump retorted, "Only Rosie O'Donnell." (Which elicited a long laugh from the crowd.) Kelly pressed Trump on past accusations of misogyny, and he insisted he doesn't have time for "total political correctness." And then he made things personal, telling Kelly, "I've been very nice to you, although I could maybe not be based on the way you've treated me."

Watch the full exchange below.

try explaining that 2 ur kids