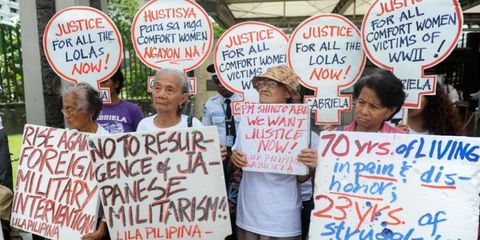 Resolving a dispute that has for decades strained relations between them, South Korea and Japan at last brokered a settlement over the issue of wartime "comfort women" on Monday.

Tensions between the nations date back over 70 years, stemming from the forced sale of tens of thousands of Korean women and girls into sex slavery before and during World War II. Many remained silent, wanting to avoid the stigma of the abuse. But in the early 1990s, more women started to come forward and now a total of 238 former comfort women have gone on the record about their experiences. Forty-six of those women are still alive today.

While diplomats and politicians praised the resolution, according to the AP, which requires that Japan give $8.3 million to administer medical, nursing, and other care to the women, survivors were quick to voice their opposition.

"The agreement does not reflect the views of former comfort women," said Lee Yong-soo, 88, in a statement made at a news conference this afternoon. "I will ignore it completely." She said that the deal was a disappointment to many women, freeing Japan from taking legal blame for its actions.

"We are not craving money," she said. "What we demand is that Japan make official reparations for the crime it had committed."