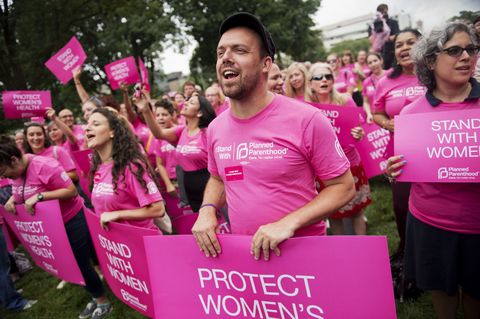 Less than two weeks after President Obama vetoed a bill that would have repealed the Affordable Care Act and defunded Planned Parenthood, House Speaker Paul Ryan announced that the House will vote to override the president's veto.

Next Tuesday, the House will hold a vote to override the president's veto of a bill to defund Planned Parenthood. https://t.co/tElmQbKOVv

This vote for life is just days after the annual #marchforlife, when thousands will rally in support of the unborn. https://t.co/tElmQbKOVv

The vote will take place on Tuesday, Jan. 26, days after the anniversary of Roe v. Wade and the annual anti-abortion March for Life in Washington D.C.

Republicans have been attempting to undo the expansive health-care legislation since 2010. The legislation gives millions low-cost insurance and mandates that private insurance plans cover birth control and contraception. In 2015, Republicans mobilized against Planned Parenthood after a series of highly edited videos released over the summer alleged that Planned Parenthood officials sell fetal tissue donation for profit. The organization has repeatedly refuted this claim. Of over 700 family planning clinics in the country, only two centers collect fetal tissue and only one collected reimbursement for fetal tissue donation — which is legal. However, in response to the videos, Planned Parenthood announced none of its clinics will accept financial reimbursement for fetal tissue.

The Senate passed a bill aimed at repealing Obamacare in December. In January, the House voted 240–181 in favor of the legislation, sending to the president's desk. After Obama vetoed the bill, Ryan vowed, "We have now shown that there is a clear path to repealing Obamacare without 60 votes in the Senate. So, next year, if we're sending this bill to a Republican president, it will get signed into law."

Next week's vote is only symbolic, however, as Republicans do not have the two-thirds majority vote that it takes for the House and Senate to override a veto. If Obamacare were repealed without a replacement health-care policy in place, millions of Americans could lose access to health insurance.