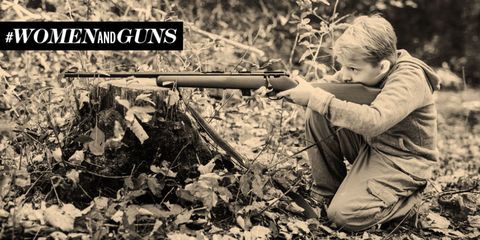 This story is a follow-up to MarieClaire.com's special report Women and Guns: The Conflicted, Dangerous, and Empowering Truth. Stay tuned this week as we publish Women and Guns response pieces and new material that sheds light on the nuanced world of females and firearms. Join the conversation on social media with the hashtag #WomenAndGuns.

I've never understood the logic of avoidance when it comes to important issues that can impact a child for life. My philosophy is to meet those issues head-on. That's why educating my children about gun safety is so important to me.

Fear is often born out of ignorance, and frankly, the general public's lack of gun safety knowledge scares the mess out of me. I've seen that education and parental influence is key in preparing kids for the real world. Whether it's their changing bodies, handling a bully, sexual curiosity, or gun safety, I will talk to them about it directly.

By growing up in a part of the country–Alabama–where hunting is an intrinsic part of our culture, exposure to guns at an early age is a given for most children. I was happily introduced to rifles as a child–and that introduction started with instructions on gun safety.

"I've never understood the logic of avoidance when it comes to important issues that can impact a child for life."

Once, as a child, my father let me shoot his .44 Magnum during target practice. The kick knocked me down. As he helped me up, he said, "Never forget how powerful guns can be. Imagine what being on the other end of that gun would do to someone. This is why we NEVER point guns at people, loaded or unloaded, pretend or real ones, unless we are seriously defending our lives. Remember this."

And believe me: I have. Because of this, I never thought of gun owners as careless, reckless people, because I knew them and understood their behavior.

In our own pursuit of raising well-rounded, practical, and cautious children, my husband and I are teaching our kids to handle a gun correctly and safely–for their sake and everyone else's.

We've also allowed our older kids, ages 8 and 9, to feel the power of a gun through its kick, instilling in them the same words of wisdom my father gave me.

Guns don't scare my kids. Actually, they're excited when they come home from school to tell me about their friends' hunting excursion or new rifle. They also enjoy the benefits of learning to cook (and then eat) what we kill. It's a lifestyle.

They already shoot rifles and shotguns when they hunt. It's legal for them to do so under supervision–and they're always supervised. With hunting being a social experience as well as a productive one, they are able to bond with our family and close family friends over traditions and trips.

Getting your own rifle or shotgun is a rite of passage among hunters, and my oldest son looks forward to getting one for himself. We will likely have him fitted for a shotgun for his 10th birthday in September, which falls during dove season–a time he's been eagerly anticipating. Last season, he shot a few more doves than his father did on several hunts, which is a source of great pride for him. Seeing the bonds that develop between them when they hunt is priceless.

When my son comes in from school, he often asks if we can go shoot squirrels; one of the benefits of living on a lot of land is being able to hunt off of your own property, and we take full advantage of that. Once a hunter reaches the age of 16, he or she must purchase their own hunting license each year, and in order to do so they must possess a graduation certificate from a State Hunter Safety Education course. My son looks forward to being able to have his own hunting license and carrying the Hunting Safety card in his wallet as a badge of honor, a club to which he can't wait to formally belong.

"gun safety is a life skill that could impact them in any number of situations."

Regardless of whether my sons become actual hunters, gun safety is a life skill that could impact them in any number of situations, and I would be amiss in not preparing them to the best of my ability.

Until then, my children have been taught from day one to never touch a gun they haven't personally unloaded–whether it's a handgun, rifle, shotgun, Uzi, bazooka, or whatever. They were also taught to ask anyone holding a gun to show them that it's unloaded if they aren't actively using it to hunt.

Our kids have also had it pounded into their heads to stay away from a gun that doesn't belong to them. It's likely that any friend or family's house my children will visit in our area will have at least one gun on the property, whether it is for hunting or protection. Because of this, I would much rather my children are able to recognize something unsafe (knowing that I will come get them from anywhere if they are ever uncomfortable with something) and to not mess with it. Preparing a child for the path (rather than trying to prepare the path for a child) is more successful in the long run, especially when their paths are out of our hands.

Because I live in a concealed carry state, I embrace that right by having a pistol permit (as do the majority of the people I know around here). Knowing that I can defend my family and myself with a gun (if the situation warrants it) is empowering and reassuring. If someone breaks into my house with the intent to harm us, being able to protect my family from the persons breaking into our home is worth more than gold. I've always heard it's a bad idea to bring a knife or baseball bat to a gunfight, and I don't intend to test that theory. And I know that it's important to know what I'm actually doing with a gun before using it.

"They understand that we don't have to live in fear of someone harming us."

Like my dad, I always have a pistol in my bedroom for protection. In an emergency, my kids know they will be defended until the police arrive (which could take a while because we live out in the country) or until the situation is neutralized. They understand that we don't have to live in fear of someone harming us, and that when they are adults they can do the same thing. But they also know they should have training and practice in order to use guns safely. Outlawing guns will never prevent criminals from obtaining them, and as a law-abiding citizen, I'd much rather not be at their mercy.

Arming our children with knowledge and good judgment are some of the best weapons my husband and I can give them. This requires active, on-going instruction as well as the chance to make good decisions. Guns are no exception to this philosophy.