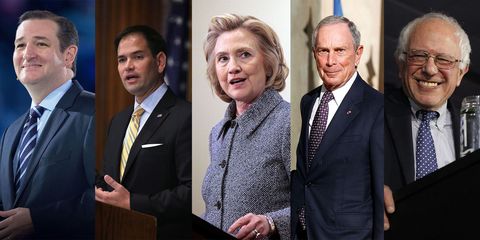 The results of the Iowa caucus are in, and...we're not much closer to knowing who our 45th president will be. But barring any surprises from trailing GOP candidates Jeb Bush, Chris Christie, or John Kasich, we do already know that it will be a historic presidency of some kind. The current frontrunners would all be the first-something president, which seems to indicate that 2008 wasn't a fluke: President Obama has opened the door for candidates previously considered to be "unelectable."

Here's what that first-something could be:

Hillary Clinton would be the first female president.

Though it may feel like old news since Hillary announced her first candidacy in 2007, a lady president could have a big impact on women's political representation in general. Today, women occupy about 20 percent of the seats in Congress, constitute a slightly larger amount of state legislatures, and sit in just six governors' offices—there have been just 37 women governors ever. And these stats aren't surprising given what women are up against. We still live in a climate when a politician would suggest that a female opponent is unqualified for his job because she's a young mother (hey, Ohio Senate Majority Leader Tom Patton, guess who showed up to work in the Senate after a blizzard?).

Donald Trump would be the first president with no political or military experience.

The Donald would be a historically unprecedented president in…many ways. But his lack of political experience was a definite plus in GOP primary season—political outsiders Ben Carson and Carly Fiorina were also big figures in the race at certain points. There have been just two presidents with zero prior political experience: Ulysses S. Grant and Dwight D. Eisenhower. Yes, they may have won wars, but who's to say that's better preparation than 14 seasons of The Apprentice?

Ted Cruz or Marco Rubio would be the first Latino president.

Ted Cruz and Marco Rubio are the two Latino candidates in this election. To be more specific, they are the two Tea Party-backed first-term senators of southern states who are sons of Cuban immigrants in this election. Besides their eerily similar bios, they also share an opposition to creating a path to legal status for immigrants (though Rubio at one point did back comprehensive immigration reform). Latinos are the biggest minority group in the country, and it's expected that securing the presidency will require winning a majority of their vote.

Bernie Sanders would be the first Jewish president.

Bernie Sanders already made history this week by becoming the first Jewish candidate to win delegates in a presidential primary. While the Bern has said that he's proud to be Jewish (his father immigrated to the U.S. after losing family to the Holocaust) he's also made it clear that he isn't particularly religious. Even though a quarter of Americans identify as "religiously unaffiliated," a lack of a religious belief is still one of the biggest taboos in politics. Virtually nobody in Congress currently identifies as an atheist, which means that a President Sanders would be unique both because of his religious affiliation and his lack of religious beliefs.

Michael Bloomberg would be the first third-party president to win an election.

Former New York City Mayor Michael Bloomberg hasn't joined the circus just yet, but recent reports that he's seriously considering it are an indication of just how unpredictable this race has become. In addition to being the first candidate from an independent or third party to win the White House, Bloomberg would also be the first Jewish president. He also could be the first president to live there in sin—he famously said that he returned to work as CEO at his company (after his tenure as mayor) to avoid talking about feelings with his longtime girlfriend Diana Taylor. Avoiding relationship talks: fueling the path to the presidency since 1776, probably.

Scarlet Neath Politics Writer Scarlet Neath is a freelance writer covering politics.
This content is created and maintained by a third party, and imported onto this page to help users provide their email addresses. You may be able to find more information about this and similar content at piano.io
Advertisement - Continue Reading Below
More From Politics
The Hope and Heartbreak of Derek Chauvin's Verdict
What Mainstream Environmentalism Gets Wrong
Advertisement - Continue Reading Below
Ma’Khia Bryant: What We Know
Jury Finds Derek Chauvin Guilty on All Charges
Senator Hirono on Her New Memoir 'Heart of Fire'
How to Demand Justice for Adam Toledo
Daunte Wright's Death Sparks Protest in Minnesota
41 Surprising Rules First Ladies Have to Follow
Asian American Women on Where to Go From Here
Syrian Journalists Reflect on a Decade of War