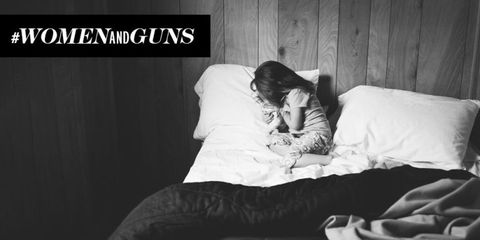 This story is a follow-up to MarieClaire.com's special report Women and Guns: The Conflicted, Dangerous, and Empowering Truth. Stay tuned this week as we publish Women and Guns response pieces and new material that sheds light on the nuanced world of females and firearms. Join the conversation on social media with the hashtag #WomenAndGuns.

When I was 9 years old, just a skinny little pipsqueak of a girl, I watched my father point a shotgun at my mother's head.

I grew up in New Hampshire in the 1960s, in a housing project apartment with more guns than rooms. There were shotguns for hunting. Hand guns for target practice. And a "lowlife special," as my father called it, tucked under my parents' mattress, to teach any lowlife who might break in a lesson.

"My father never locked his guns up. Never. It would've been like locking up the Rice Krispies."

My father never locked his guns up. Never. It would've been like locking up the Rice Krispies.

I knew I wasn't supposed to play with them. "A gun's not a toy," he told me a bunch of times. But I never really bought it. Especially not after watching him kid around with guns himself. Like the time he pointed one at the TV and pretended to blow away Lawrence Welk. That really cracked me up—I couldn't stand polka music, either.

When no one was around, I used those guns to play cops and robbers. Sometimes I was the cop, more often the robber. It was way more fun being the robber. "Stick 'em up!""Hand over the dough!" I liked ordering imaginary grown-ups around. You get sick of being ordered around by the real ones when you're a kid.

All the time I was playing with those guns, I didn't know whether they were loaded. Some of them were and some of them weren't. It didn't seem to matter. I was having too much fun to even think about it.

I suppose if I'd been given toy guns I would've played with them instead. But I was a girl, and girls were given Barbies and Easy-Bake ovens. (Or, once in a while, a stolen bicycle.)

I was never a very good shot. I had lousy vision, which I didn't let on about so I wouldn't get stuck wearing glasses and being called four-eyes. With my crummy eyesight, I should never have been handling a gun in the first place. Especially not the day my father went ballistic.

"All the time I was playing with those guns, I didn't know whether they were loaded."

The day began like any other Saturday. I'd been watching cartoons. Wile E. Coyote. Yosemite Sam. I was what you might call a cartoon addict. I preferred animated characters to real people.

My mother came home from working the nightshift in a sunglass factory. She was late because she'd been working overtime to earn extra money. My father didn't buy it. When he'd been drinking, nobody could convince him of anything. He knew best even though he couldn't see straight himself.

He accused my mother of fooling around. Then he went and got his rifle.

Suddenly, I turned into Mighty Mouse. It was up to me to save the day. I ran to the hall closet and grabbed a pistol. This was no longer make-believe. The gun felt heavier than I remembered. My skinny arms shook. My fuzzy vision seemed fuzzier through the tears.

I walked to the kitchen where my mother was standing frozen by the stove, my father a few feet away, his finger on the trigger. They didn't even know I was there.

I felt a scream fill my mouth. I clamped my lips tight, afraid my voice would startle him and that the gun pointed squarely at my mother would go off. Then wouldn't it be all my fault if she got shot?

My mind was exploding with coulda, shoulda, and woulda. I coulda stopped this from happening. I shoulda been in the kitchen, not watching stupid cartoons. I woulda explained to my father that my mother was working late so she could pay for a toy I'd seen advertised on TV and wanted so badly it hurt.

But it was too late for explanations.

My mother's face was as white as I imagined heaven to be. My father, like an angry god, held her fate in his hands. They were saying stuff that I could barely hear with all the blood pounding in my ears.

I raised the gun. I knew one of them had to go. Him or her. There was no good choice. No happy ending. No funny ha ha cartoon death.

"I knew one of them had to go. Him or her. There was no good choice."

And then—halleluiah!—someone did. A friend of my father's walked through the front door and grabbed the shotgun. He checked the barrel. It was loaded.

He yelled at my father. And my father slumped into a chair.

That man stopped my father from making the biggest mistake of his life. At least I think he did. But I'll never really know for sure. Maybe my father was just fooling around. Maybe he was just trying to teach my mother a lesson she'd never forget. That's what he said later when he'd sobered up. But I don't think he knew himself if he would've pulled the trigger.

As for me, I held onto that pistol until the coast was clear. Then I put it back in the closet. I hid it as best as I could under the ice skates and galoshes. Hid it so maybe he couldn't find it.

I went back to watching cartoons, but they weren't as funny.

Gloria as the author of the memoir KooKooLand.