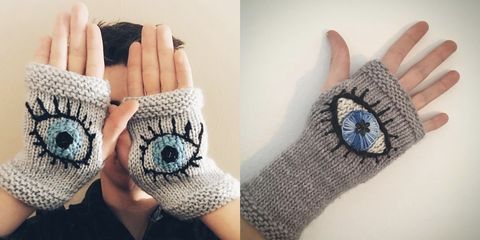 The March for Our Lives is taking place this weekend, and there's one symbol you're likely to see over and over, and that's the evil eye.

Related Story
Best Signs from the March for Our Lives

In the same way that pink pussy hats became iconic at the Women's March, evil eye gloves are set to become the symbol used at March for Our Lives. Participants are already taking to social media to share their "evil eye" gloves, and for a very important reason.

Ready for #MarchForOurLivesdc w/ my #evileyeglove to let our elected officials know WE ARE WATCHING y'all!

Created by Krista Suh, who was also behind the pink pussy hats, the campaigner revealed how she thought up the idea. Writing about the new symbol on her blog (via CNN), Suh said, "It came to me in a dream, just minutes before waking up—I had a dream of a protest, a huge peaceful crowd with their hands outstretched toward the sky—each palm had a huge EYE drawn on it. It was a Sea of Eyes."

As for why the eyes are so important, Suh revealed, "Congress needs to know that the people are watching."

According to CNN, more than a thousand pairs of gloves have been donated to the cause by crafters from all over the world, with many marchers making their own in preparation for the event.

Speaking to USA Today about the movement, Suh explained that the "evil eyes" also serve as a warning: "We have our eyes on politicians who take money from the NRA... We are watching, and you need to serve the people, not lobbyists."

If you'd like to make your own pair of evil eye gloves in support of March For Our Lives, there's a handy template and step-by-step guide available.

Related Story
Parkland Survivors Call for a March on Washington
Amy Mackelden Weekend Editor Amy Mackelden is the Weekend Editor at HarpersBAZAAR.com, where she writes about entertainment, celebrity news, beauty, and fashion.
This content is created and maintained by a third party, and imported onto this page to help users provide their email addresses. You may be able to find more information about this and similar content at piano.io
Advertisement - Continue Reading Below
More From Politics
Moving Forward: We Need Better, Not 'Normal'
Could This Be the Last Year of Roe v. Wade?
Advertisement - Continue Reading Below
Meet the Next Presidential Pets, Major and Champ
Who Is Jen Psaki, Biden's Press Secretary?
Bernie Sanders at the Inauguration Is a Whole Mood
The Inaugural Concert Was a Cheesy Balm
Read VP Kamala Harris's Inauguration Speech
No, There Is No Inaugural Ball This Year
Kamala Harris Is "Momala" to Two Stepchildren
Read Amanda Gorman's Moving Inauguration Poem