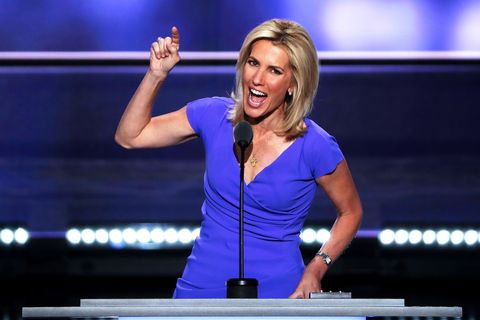 Laura Ingraham, host of The Ingraham Angle on Fox News, has become the target of an advertiser boycott after she criticized a survivor of the mass shooting at Marjory Stoneman Douglas High School in Parkland, Florida.

David Hogg, one of the most outspoken survivors of the shooting, told TMZ that he was rejected by four colleges in the University of California system, despite his 4.2 GPA and 1270 SAT score, and, you know, spearheading a national movement. “I’m not surprised at all, in all honesty,” he said. “I think there’s a lot of amazing people who don’t get into college, not only who do things like I do, but because their voices are just not heard in the tsunami of people that apply every year to colleges.”

He was accepted by Cal Poly, Cal State San Marcos, and Florida Atlantic University, but told the site he was disappointed by his rejections and wasn’t sure what his next move will be. On Wednesday, Ingraham tweeted an article about Hogg’s college acceptances, saying he was “whining” about it.

David Hogg Rejected By Four Colleges To Which He Applied and whines about it. (Dinged by UCLA with a 4.1 GPA...totally predictable given acceptance rates.) https://t.co/wflA4hWHXY

Hogg responded, putting together a list of Ingraham’s advertisers and asking his followers to contact the companies, suggesting they boycott the show.

Soooo @IngrahamAngle what are your biggest advertisers ... Asking for a friend. #BoycottIngramAdverts

Pick a number 1-12 contact the company next to that #

Nutrish, a pet food brand owned by Rachael Ray, was one of the first to pull its ads from The Ingraham Angle. “We are in the process of removing our ads from Laura Ingraham’s program,” Nutrish wrote on Twitter, prompting thanks from Hogg.

Travel review site TripAdvisor told TMZ it was pulling ads from the program. "In our view, these statements focused on a high school student, cross the line of decency,” a representative told the site. Hogg also publicly thanked the company on Twitter.

The online furniture company Wayfair also pulled their ads, telling CNBC, “We do not plan to continue advertising on this particular program.”

Shannon Coulter, the activist behind the #GrabYourWallet movement, told The Washington Post it wasn’t just Ingraham’s one tweet that sparked action. “Corporate America has a really positive role to play in preventing that kind of targeted harassment,” she told the newspaper. “It’s not just that one tweet. It’s that [Ingraham’s] signaling to her large audience that it’s okay to do that. Particularly when minors are concerned I think there’s a line that corporations can draw that apparently Laura Ingraham’s parents didn’t draw.”

On Thursday, Ingraham tweeted an apology:

“Any student should be proud of a 4.2 GPA, [including] @DavidHogg111. On reflection, in the spirit of Holy Week, I apologize for any upset or hurt my tweet caused him or any of the brave victims of Parkland. For the record, I believe my show was the first to feature David immediately after that horrific shooting and even noted how ‘poised’ he was given the tragedy. As always, he’s welcome to return to the show anytime for a productive discussion.”

Any student should be proud of a 4.2 GPA —incl. @DavidHogg111. On reflection, in the spirit of Holy Week, I apologize for any upset or hurt my tweet caused him or any of the brave victims of Parkland. For the record, I believe my show was the first to feature David...(1/2)

... immediately after that horrific shooting and even noted how "poised" he was given the tragedy. As always, he’s welcome to return to the show anytime for a productive discussion. WATCH: https://t.co/5wcd00wWpd (2/2)

Fox News did not immediately respond to MarieClaire.com’s request for comment.

Related Story
Chelsea Clinton on the Persistence of the MSD Kids
Advertisement - Continue Reading Below
More From Politics
How Planned Parenthood Is Responding to COVID-19
British PM Boris Johnson Has Coronavirus
Advertisement - Continue Reading Below
Fear Is a Virus
COVID-19 Exposes the Dangers of Gender Inequality
“I’m Homeless—How Can I Self-Quarantine?”
Will the Conventions Be Canceled in 2020?
Rep. Katie Porter on Being an Effective Politician
Time's Up CEO Reflects on the Weinstein Verdict
Everybody Running for President In 2020
Warren Has Dropped Out of the Presidential Race