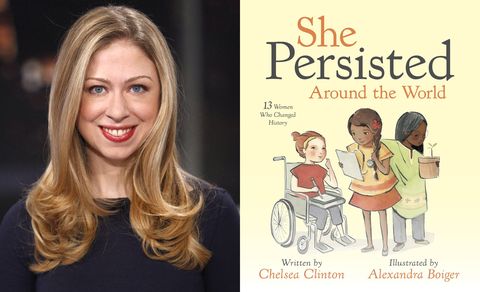 Attention people with kids, or people with friends who have kids, or just people with an interest in women's history and a love of reading: Chelsea Clinton has released a follow-up to her best-selling children's picture book, She Persisted. The new tome, She Persisted Around the World, again features 13 women who changed the course of history, overcoming obstacles that less, well, persistent people may not have been able to surmount. But this time the subjects in the book are international, having influenced the fields of science, civil rights, the arts, and more, in countries including Mexico, Poland, and Liberia.

Imbuing young Americans with a global perspective is key for Clinton. "Their whole experience is so U.S.-focused," she tells MarieClaire.com. "Sometimes what has happened here in the United States first happened elsewhere. I was in a conversation with elementary school–aged children, and many of the girls were surprised that New Zealand had gotten the right to vote for all women through Kate Sheppard and the New Zealand suffragette efforts 25 years before the U.S. We need more stories of women around the world—not only for girls anywhere, although that too, but for kids here in the United States."

Choosing which of those stories to include was a massive undertaking. There are, of course, hundreds, if not thousands, of women who have impacted the world over the course of human history. For the original iteration, Clinton chose women she had personally been inspired by—"I remember hearing about Harriet Tubman from my mom, and watching Flo-Jo break the world record," she says—but for the new version, Clinton enlisted an army of other women, requesting suggestions of whom they found inspiring, all with the unifying theme of persistence.

"I'm grateful for the inestimable courage of the Parkland students, and made hopeful by their indefatigable persistence."

Some of the selections may surprise you. I, a college-educated professional adult, hadn't heard of several of the book's subjects before leafing through it (all the more reason to buy a copy, children in your home or not). "I had never heard of Mary Verghese," Clinton admits. "And already I've met a handful of young people who immigrated or whose parents immigrated from India, saying 'Thank you, she was a medical revolutionary in our country's history.' I'm so grateful I know that now. I wish I had known her story as a young reader." Others, like J.K. Rowling and Malala Yousafzai are household names—but perhaps not ones whose accomplishments are enshrined in the history books yet. The mix of the familiar and the unknown was intentional.

The story of Indian doctor Mary Verghese is featured in the book.
Courtesy of Penguin Random House

A lot has changed in the year since the first book was published, just after Clinton's mom (who gets a special nod in the original) lost the presidential election to Donald Trump. I ask Clinton what she makes of the tumult. She mentions the teens who have created the #NeverAgain movement: "I'm one of, of course, many millions who are so just humbled and proud and grateful for the inestimable courage of the Parkland students," she says. "And really made hopeful by their indefatigable persistence."

"Maybe they'll be in a book like yours someday," I reply.

"They're writing their own story," she says. "So, even better." Even better.