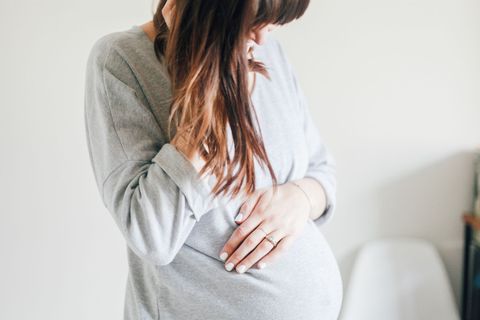 In 2014, I was 15 weeks pregnant and sitting on a tissue-covered exam table at my doctor’s office, joking with my partner about whose genetics were responsible for the miniature features we’d seen during our last ultrasound. When the doctor walked in with the results of our latest scan, the look on her face told me in an instant that something was wrong.

The test—a nuchal translucency ultrasound—had come back abnormal, weighing my pregnancy down with terms like “congenital heart defect” and “chromosome abnormality.” In a matter of minutes, we went from debating whose nose our baby was going to inherit to learning about the risks of various medical tests, being referred to a fetal and neonatal cardiologist, and discussing the possibility of terminating a pregnancy we very much wanted during the second trimester.

In a matter of minutes, we went from debating whose nose our baby was going to inherit to discussing the possibility of terminating a pregnancy we very much wanted.

But what I faced pales in comparison to a more unbelievable scenario—one that is terrifyingly close to reality. On May 22, the Trump administration submitted proposed changes to Title X, which would prevent clinics or organizations that receive federal family planning funds from providing abortions or referring women to organizations that do, The New York Times reports. And while the order doesn’t go as far as to reinstate a Reagan era “domestic gag rule," which would prevent health care providers that receive Title X funding from even mentioning abortion services, it comes pretty close—and the silencing of doctors could be on the horizon.

According to Planned Parenthood, four million family planning clients are served by Title X, which means—if the domestic gag rule is reinstated—a physician looking at a woman in a situation like mine, would have to bite her tongue; the government wouldn’t allow her to discuss every possible medical option with her patient. As it stands now, she wouldn’t be able to perform an abortion if it was deemed necessary or refer me to a healthcare provider that could.

That’s a frightening scenario for doctors trained and sworn to first do no harm. A physician's responsibility is to lay out all the information on the table and enable the patient to decide what’s best. “As a physician, one of the core things that we learn and are taught in medical school is to respect a patient’s autonomy, their right to information, and their right to make choices about their medical care,” Karen M. Duncan, M.D., a New York City-based OB-GYN, tells MarieClaire.com. “We’re taught not to allow our own opinions to affect that counseling or the guidance of patient care, and certainly not to let somebody else guide the patient’s decision making choices.”

Dr. Duncan doesn’t provide abortions, but says she often refers patients to a clinic that does. The domestic gag rule would essentially prevent her from providing information or referring patients to that clinic, effectively limiting the care she can give. “If abortion is legal—and I certainly hope it will remain legal—to not be allowed to counsel a patient about that option seems, to me, like a violation of the Hippocratic oath that we take,” Dr. Duncan says. “That’s part of doing no harm and respecting a patient’s autonomy and her ability to choose and make decisions about her own medical care.”

It could also fundamentally change the nature of the doctor-patient relationship. “The sanctity of doctor and patient privilege is protected,” says Carrie Griffin, D.O., a family medicine physician and abortion provider in New Mexico and fellow with Physicians for Reproductive Health. “If we’re not able to offer unbiased, evidence-based care that is crucial to a patient’s well-being, it will change the relationship.”

“If we’re not able to offer unbiased, evidence-based care that is crucial to a patient’s well-being, it will change the relationship.”

Like the American College of Obstetricians and Gynecologists and the American College of Physicians, Dr. Griffin opposes the domestic gag rule, saying it will negatively impact her ability to treat her patients effectively, while simultaneously putting patients in danger. According to a 2017 report by the Center for Reproductive Rights and Ibis Reproductive Health, states with the highest number of abortion restrictions tend to have the worst women's and children’s health outcomes and the fewest supportive policies that would actually advance the health and well-being of families. “What’s likely to happen is that people will simply stop seeking medical care and, instead, we will end up with higher rates of unintended pregnancies and higher rates of maternal and infant mortality,” Dr. Griffin says.

After my partner and I had time to adequately digest the medical information provided to us, we came up with a plan of action that felt true to our beliefs and, more importantly, my needs as the pregnant person who would endure additional testing and procedures. We also made a decision as to whether or not—based on the information provided by those tests—I would continue with the pregnancy. That choice was ours and ours alone, and one we don’t feel the need to share. Thankfully, in the end it was one we didn’t have to make—the additional tests came back negative and the varying abnormalities that were once a concern diminished. A few months later, I gave birth to a healthy baby boy.

The author with her family
Danielle Campoamor

But having every single medical option, including abortion, described to me in those first, terrifying moments helped me gain some control over an otherwise uncontrollable situation. My physician explained that while I couldn’t change the outcome of any potential diagnoses, I could decide what I wanted to do—as a patient, a woman, and a future parent. Information about abortion is essential to family planning, and patients—including the 1,800 women each year who decide to end their pregnancies due to a fetal abnormality—should have the right to make that choice using all of the information available.

It’s been four years since I sat on that uncomfortable, paper-covered exam table and saw that look on my doctor’s face. Now, I am 15 weeks pregnant with what will hopefully be my second child. My pregnancy has been labeled high-risk, I’m at the same gestational age I was when the potential complications with my first pregnancy arose, and I would be lying if I said I wasn’t scared every time I visit my OB-GYN for an ultrasound. And while I always hope for good news, I always expect to hear all the news: the good, the bad, and the probable.

The Truth About Abortion Reversal
On Being Pro-Choice And Grieving My Abortion
This content is created and maintained by a third party, and imported onto this page to help users provide their email addresses. You may be able to find more information about this and similar content at piano.io
Advertisement - Continue Reading Below
More From Politics
Senator Hirono on Her New Memoir 'Heart of Fire'
How to Demand Justice for Adam Toledo
Advertisement - Continue Reading Below
Daunte Wright's Death Sparks Protest in Minnesota
41 Surprising Rules First Ladies Have to Follow
Asian American Women on Where to Go From Here
Syrian Journalists Reflect on a Decade of War
How to Show Your Support for the AAPI Community
Activist Lydia X. Z. Brown on Disability Justice
Elisa Crespo: "I'm Not Here to Make History"
What We Know About the Georgia Spa Shootings