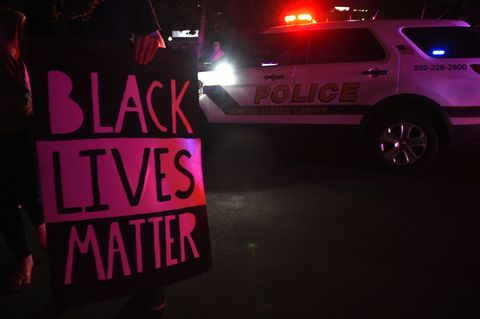 I saw the #AltonSterling and #PhilandoCastile hashtags first, and both times my heart did that horrible thing that feels like a punch high in the chest but from the inside.

What now? Who died now? And then the inevitable: Which Black person was gunned down now?

The fact that my brain knew to do that—to automatically follow a script—is a symptom of how we all consume police brutality against Black Americans now: video, tears, outrage, no justice, repeat. And that terrifies me. I know the cruel pattern by heart, like it's a bunch of memorized dance steps. But what leaves me truly heartsick about this is thinking that perhaps when the next video shows up—because there will be another one—I'll watch it and maybe I won't cry as long or at all. Maybe the next video will leave me feeling deflated instead of swollen with anger. Maybe the next gruesome footage will force the last bit of hope to dribble out from my reserve and I will finally be convinced that nothing will change and freedom is not ours to claim.

I worry that when the next video shows up I'll watch it and maybe I won't cry as long or at all.

What's sickening is that there was another one. Just 24 hours after the Alton Sterling story came to light—his blood not yet dry—there was another police shooting in another state all the way across the country. Another Black man shot to death. Another video. This one, of 32-year-old Philando Castile, was streamed to Facebook Live by his girlfriend, who was sitting in the back of the car with her young daughter, who can be heard, at one heartbreaking point, saying, "It's okay mommy." Castile was shot four times after police stopped his car for having a broken tail light.

When these videos "go viral," when they autoplay on your Facebook page, they numb the sting. They shave down the prickly edges that should come from watching someone die. Hasn't this already happened? Haven't I already seen this one? 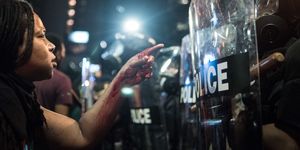 Yes, we need proof. We need evidence of the stone-cold racism and social injustice that people of color face every day in this country. We need an undeniable reminder that Black lives still don't matter enough.

But there's proof—and then there's just watching. And there's being forced to watch without your consent because, as you're scrolling through your social feed, there it is, already playing.

Seeing these videos autoplayed over and again normalizes the perversity of it all.

Believe me I know how much we as a society need to scream about this to anyone who will listen. I know we have to take our outrage public if we're going to see it make any kind of change. But when watching a Black man die goes viral, it makes the next grisly video of the same thing that much easier to stomach. That much more expected.

But as a Black mother raising a brown boy in this country, the story cannot stop there.

I don't have the mental or spiritual capacity to see any more videos like this. Is it self-protection or desensitization? Maybe it's both—I can't tell the difference. And that's the problem.

But as a Black mother raising a brown boy in this country, the story cannot stop there. I cannot afford to be numb and broken or breathless, to tune out or to retreat. This is the world that we're living in, the one that my son will have learn how to navigate and do more than just survive but actually thrive in.

I hope that by the time he's grown, videos like this don't go viral. I hope they don't exist at all. But one day soon he'll probably watch one, and I need to be ready to steady him through the shake and the shock.

Nicole Blades Nicole Blades is a novelist, speaker, and freelance journalist who covers women's health, race and culture, books and publishing, and stories of reinvention for various national print and digital magazines.
This content is created and maintained by a third party, and imported onto this page to help users provide their email addresses. You may be able to find more information about this and similar content at piano.io
Advertisement - Continue Reading Below
More From Politics
For Teachers, Going to Work Can Mean Life or Death
Want to Help Moms? Prioritize Menstrual Equity
Advertisement - Continue Reading Below
Abortion Rights Start at the State Level
All of Your Abortion Questions Answered
The Texas Abortion Snitch Site Is Having a Bad Day
The Future of Afghan Women Depends on Us
How You Can Help People in Afghanistan
Andrew Cuomo Has Resigned as NY Governor
Gwen Berry: Athlete, Activist, Olympian
The Anti-Choice Endgame: Power And Control