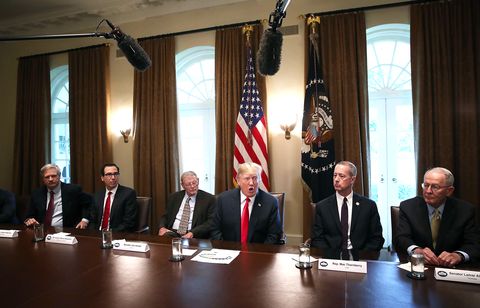 In a meeting with more than a dozen members of Congress Wednesday, President Trump brought up the looming crisis of the separation of immigrant families at the border. "Those images affect everybody," the president said of the viral photos of screaming children being torn from their families. Here's what else affects everybody: The hegemony of white, middle-aged men on the Hill, an issue perfectly illustrated by journalist Mike Knoller's photograph of Trump's meeting.

CBS correspondent Mark Knoller tweeted the image of the nearly two dozen politicians—none of whom appear to be women or people of color—sitting alongside Trump as the president discussed immigration. "We are keeping families together, but we have to keep our borders strong," the president declared, according to Knoller, surrounded completely by middle-aged white men.

It's not the first photograph taken of an all-white, all-male White House meeting—remember that infamous photo of two dozen men deciding the future of women's health care?—but immigration is an issue that disproportionately affects women and children. For example, the forced separation of families at the border leaves women of all ages especially vulnerable to sexual assault, as several experts have warned.

A close reading of the photo shows exactly one woman in the very background of the photo, and she appears to be a reporter, not a politician.

"We are keeping families together but we have to keep our borders strong. We will be overrun with crime and people that should not be in our country," the Pres told meeting with members of Congress. Said he'll sign order on families, before leaving for Minnesota this afternoon. pic.twitter.com/UztrFdqR9v

Other photos of the meeting reveal that Ivanka seems to have been present—and standing near the meeting, but not at the table.

Much like Knoller's photo, this is a telling image. Ivanka, who supposedly identifies as a moderate and has pledged to support women and children as a White House staffer, serves as senior advisor to the president. Yet, she isn't sitting at the table. This photo of her silently standing in the background is a powerful reminder of her silence on the border issue.

But back to Knoller's photo. Certainly, the halls of Congress have always been almost entirely white and male. Yet, efforts to diversify the country's leadership—efforts that have been partially successful, at least when you look at the racial demographics of those running for office this year–seem to be all but ignored by this administration. In this photo, the assembled group of politicians are just as white, male, and middle-aged as the politicians two hundred years ago.

On the bright side, everyone in this picture looks blissfully ignorant of the small army of women and individuals of color working to usurp them—and there are only five months left until November.

Jenny Hollander Director of Content Strategy Jenny is Marie Claire’s Director of Content Strategy, editing and writing about everything from politics to reality television to accessories and celebrity news.
This content is created and maintained by a third party, and imported onto this page to help users provide their email addresses. You may be able to find more information about this and similar content at piano.io
Advertisement - Continue Reading Below
More From Politics
Daunte Wright's Death Sparks Protest in Minnesota
41 Surprising Rules First Ladies Have to Follow
Advertisement - Continue Reading Below
Asian American Women on Where to Go From Here
Syrian Journalists Reflect on a Decade of War
How to Show Your Support for the AAPI Community
Activist Lydia X. Z. Brown on Disability Justice
Elisa Crespo: "I'm Not Here to Make History"
What We Know About the Georgia Spa Shootings
Dianne Morales Has Never Listened to the Naysayers
Stacey Abrams on Her Definition of Success