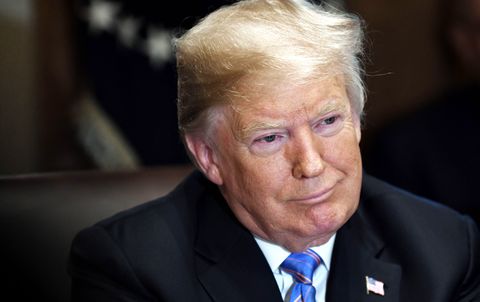 Wherever you go, whatever you do, there will be a wince-inducing Trump news story waiting for you when you get back. Now, you probably felt a familiar flicker of anxiety when you read that, but you may also have recognized the chorus to the '89 Richard Marx classic "Right Here Waiting." But what does one have to do with the other, you may ask?

Well, until today, not much: One is a timeless piece of music, and the other is orange and very, very mean. Today, however, Richard Marx himself, a man I thought was a one-hit wonder but whose Twitter bio informs me has actually created 50 number-one hits, thank you very much, weighed in on Trump's "would/wouldn't" snafu via Twitter, writing:

I misspoke. I meant to say I “wouldn’t” be right here waiting for you.

The world and internet alike promptly lit up with responses, ranging from, "Are you actually kidding me?" and "Isn't this treason?" to Richard Marx's one-liner, which I personally believe to be the only amusing part of this entire national nightmare.

I misspoke. I meant to say I “wouldn’t” be right here waiting for you.

If you're still a little iffy on what Marx is referencing—and, if so, my advice is to go and watch a batch of '90s romantic comedies immediately—let me refresh your memory.

Wherever you go, whatever you do, I will be right here waiting for you...

Whatever it takes, or how my heart breaks... 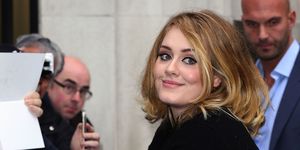 Adele Is So Not Here for Trump Using Her Music

Dear Trumps, You're Not Victims.
Jenny Hollander Director of Content Strategy Jenny is Marie Claire’s Director of Content Strategy, editing and writing about everything from politics to reality television to accessories and celebrity news.
Advertisement - Continue Reading Below
More From Politics
Get to Know CBS News Anchor Norah O'Donnell
Everything We Know About Senator Warren's Husband
Advertisement - Continue Reading Below
Mayor Pete's Husband Would Be a "First Gentleman"
How a Parkland Mom Turned Her Grief into Action
He Voted for Trump. She Voted for Bernie.
How Guerrilla Feminists Are Fighting Femicide
Who Was Mayor Pete's Father, Joseph Buttigieg?
Nancy Pelosi, Icon, Ripped Up Trump's SOTU Address
Thoughts From a First-Time Caucus-Goer
And Now, a Word From the Future Voters of Iowa