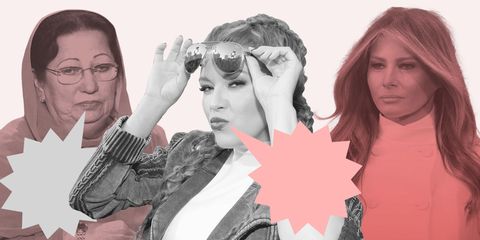 Regardless of who wins the presidency, this election has been, obviously, one for the books. For the first time in our country, a woman was elected as the candidate for a major political party. On the flip side of that historic coin, this was the first time a presidential candidate has been called out for allegedly bragging about sexual assault against women.

The very last word in the third and final presidential debate was "her." Perhaps unsurprisingly, it was an attack from Donald Trump directed at Hillary Clinton, the last of 700-plus times Trump mentioned his opponent across all three presidential debates.

In fact, women were discussed—in drastically different lights—a groundbreaking number of times this election cycle. Here, a breakdown of how, why, and to what effect women were invoked in the three presidential debates.

Interestingly, Trump didn't use the words "woman" or "women" once in the entire first debate. Clinton did five times, including a call to "guarantee, finally, equal pay for women's work."

The second debate, days after the release of the 2005 Access Hollywood tape in which Trump brags about sexual assault, was different. Clinton used nine of her 13 mentions of "women" in that face-off to attack Trump. And Trump used the words "I apologize" and the word "women" for the first time on a debate stage—though not in the same sentence. "I apologize to my family. I apologize to the American people," he said, later adding that,"nobody has more respect for women than I do." Incidentally, when he used that line again in the final showdown the last debate, the audience laughed out loud.

The final debate included 40 mentions of "woman" and/or "women," more than the second (27) or the first (5). Overall, the 2016 debates have featured more mentions of "women" than ever before—understandably so.

On more granular policy issues, Clinton focused more than Trump did on the seven issues that a majority of millennial women identified as a "top priority" in our sister site Cosmopolitan.com's 2016 Election survey back in February. Trump mentioned only one of those issues, National Security, more than Clinton did.

None of the 135 debate questions were about the wage gap, but Clinton brought up the issue on her own three times. Once was as her final criticism in a flurry against Trump: "This is a man who has called women pigs, slobs, and dogs, and someone who has said pregnancy is an inconvenience to employers, who has said women don't deserve equal pay unless they do as good a job as men."

The only extended discussion of reproductive rights was in the Supreme Court section of the last debate, where Clinton offered a stirring defense of a woman's right to choose. "I will defend Roe v. Wade, and I will defend women's rights to make their own health care decisions," she promised.

Trump, who didn't mention "women" once in the entire back-and-forth on abortion, argued that the federal decision of Roe v. Wade should be struck down and "go back to the states." Still, the five-minute exchange amounted to less than two percent of the 4 hours and 33 minutes Trump and Clinton spent sparring.

Across all three debates, Trump talked 15 percent more than Clinton did, and he got the last word on each night. The real final say, however, goes to the voters on November 8.

Adam Tiouririne of Logos Consulting Group advises CEOs high-stakes communication and is the Bloomberg Politics language analyst for the 2016 presidential campaign. Follow him on Twitter.