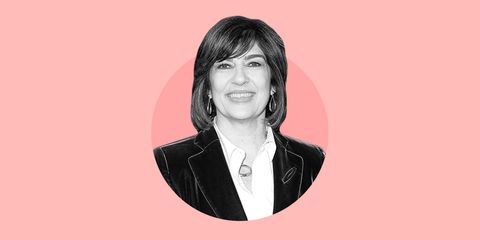 You might know Christiane Amanpour from her nightly show on CNN International. Or maybe from her Peabody Award for groundbreaking journalism. Or, perhaps from her exclusive television interviews with international leaders like Egyptian president Hosni Mubarak or Libyan prime minister Muammar Gaddafi. But she first made a name for herself as a war correspondent in the 1990s, when she reported from Bosnia and made observations that her fellow journalists simply weren't willing (or able) to say. The unflinching determination to be "truthful, not neutral" is what makes Amanpour so admirable, and remains the official slogan for her show today.

This week, the renowned journalist was honored with a lifetime achievement award at the International Press Freedom Awards. The event came just a day after the president-elect of the United States held a meeting with members of the press, and reportedly "scolded" them for their allegedly biased treatment of his campaign. Before accepting her award, Amanpour sat down with MarieClaire.com to discuss Trump, fake news, and the "post-truth" world we're currently living in.

Marie Claire: The slogan of your show is truthful, not neutral. Can you explain what that means, especially now?

Christiane Amanpour: "When I was covering the Balkan War—the ethnic cleansing, the genocide—I came to understand that being balanced is not necessarily being truthful. For instance, let's take climate change. The vast majority believes that climate change is man-made, and a terrible thing happening to our planet. There's a tiny proportion of people who don't believe that, and yet they have been given equal weight. That's damaging. In Bosnia, if I had equated the victims with the aggressors, I would end up being an accomplice. And in that case, an accomplice to genocide, because that's what was going on.

There seems to be such a struggle with journalists right now: what is the truth? How do you know what the truth is? Well, you know, it's actually not that difficult. There are facts. We live in a facts-based world. You can find the body of evidence. You're on a slippery slope when you start confusing neutrality with truth."

"How do you know what the truth is? Well, you know, it's actually not that difficult. There are facts."

MC: What is the role of journalists now, when the truth is somehow seen as biased?

CA: "Truth is not biased. There's a very clever campaign by people who resist truth. What we see now, this explosion of fake news sites (i.e. lies), it's completely put our reality on its head. It's turned it upside down. So everyone's kind of flailing around, trying to figure it out. The Oxford-English dictionary used "post-truth" as its word of 2016. We exist in a gray zone, or a black zone, that we have never experienced. We've never experienced this complete toppling of evidence, and that's what we have to struggle to maintain.

When you have the New York Times accused of being crooked or lying, it becomes very dangerous because it confuses people. And here's the thing: I think that sadly, social media has outpaced our ability to keep up... There was a statistic I read in the final weeks of the election about how fake news sites are getting exponentially more clicks than all the established, non-imposter news sites combined. That's very dangerous."

MC: Do you think people have always read what they want to read, and now they simply have more options to do so?

CA: "No. I think there have always been lies, demagoguery, and conspiracy theories. It's not that we have more options, it's that it is algorithmically, exponentially driven into our brains. People have the option to go into their corners much more than they did before—more into their echo chambers, into their own bubbles—and just call the fact-based media biased and lying, as Donald Trump did throughout the campaign. That's where the danger is."

MC: Speaking of Trump, you've interviewed a complex array of leaders over the years. You haven't spoken with him yet, but how does he compare with some of the leaders you have spoken with? How would you approach an interview with him?

"It's time to get a good, televised foreign-policy interview with Trump, and I hope I get it!"

MC: What is the most pressing foreign-policy issue of his administration?

CA: "It'll be very interesting to see if the United States of America stands up for those who are being slaughtered, who are under siege right now in eastern Aleppo. Then, I think, the combination there is Russia. What will the next president do for and about Russia? It is clear that the United States needs a better relationship with Russia, but based on what parameters?

Obviously, people are looking to see if Trump keeps the climate-change accords. I think most young people in this country and around the world want the Paris accords to remain, because they understand it as an existential threat to their future. I think people are also looking at the Iran nuclear deal.

One thing people aren't looking at is the situation in North Korea. James Clapper, the outgoing director of national intelligence, said a few weeks ago that North Korea is now a nuclear state. We can't roll it back. We have to figure out how we can manage it, or at least manage their nuclear capabilities. And that, I think, is going to be a very big item that isn't on the front burner right now, but will be."

Kaitlin Menza Kaitlin Menza is a freelance features writer.
This content is created and maintained by a third party, and imported onto this page to help users provide their email addresses. You may be able to find more information about this and similar content at piano.io
Advertisement - Continue Reading Below
More From Politics
Senator Hirono on Her New Memoir 'Heart of Fire'
How to Demand Justice for Adam Toledo
Advertisement - Continue Reading Below
Daunte Wright's Death Sparks Protest in Minnesota
41 Surprising Rules First Ladies Have to Follow
Asian American Women on Where to Go From Here
Syrian Journalists Reflect on a Decade of War
How to Show Your Support for the AAPI Community
Activist Lydia X. Z. Brown on Disability Justice
Elisa Crespo: "I'm Not Here to Make History"
What We Know About the Georgia Spa Shootings