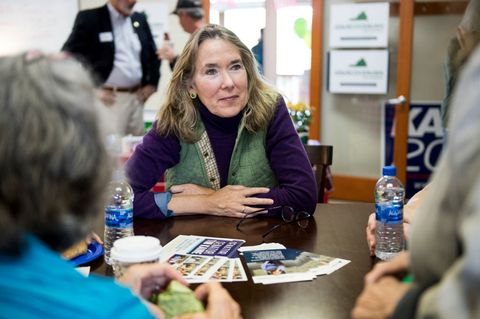 It’s pretty common knowledge that Olivia Wilde is one of the coolest celebrities: She’s an outspoken feminist activist, she takes on exciting roles as an actress, she’s now a badass director, thanks to her upcoming movie, Booksmart. And it turns out she gets it from her mama, Leslie Cockburn, an award-winning journalist running for Congress in Virginia’s 5th district.

Before running for the U.S. House of Representatives, Cockburn was in the second class of women ever allowed at Yale. As a journalist for nearly 35 years, she created documentaries (alongside her husband, Andrew Cockburn, Olivia Wilde’s dad) for PBS’ Frontline, ABC News, and 60 Minutes, on some pretty intense subjects: How the CIA encouraged drug-trafficking, the U.S.’s covert support of the Khmer Rouge, and the Taliban. And it paid off: She won a slew of journalism awards for it.

Now, she’s running as a Democrat in Virginia’s 5th district, one of the largest voting districts in the country, according to the New Yorker, and the home of Charlottesville, where hundreds of neo-Nazis marched last year at a white supremacist rally. At that event, one suspected nationalist sympathizer drove his car through a crowd of protesters, leaving one woman, Heather Heyer, dead. As a progressive Democrat running against Trump-endorsed Republican Denver Riggleman—who you may recall from his Bigfoot porn appreciation and for which we’re not going to judge him— in a state that typically swings to the right, Charlottesville looms large.

So being Olivia Wilde’s mother is really just icing on an already impressive cake for Leslie Cockburn, but Wilde has talked about how excited she is for her mom. “It’s extraordinary to watch your own mother pivot from being a journalist for 35 years to running for Congress,” Wilde told Access a few months ago. “I was already in awe of my mom and now it has been taken to another level.”

Wilde and her husband, Jason Sudeikis, hosted a rally at University of Virginia in October in order to support Cockburn’s candidacy, and Wilde has since done some Get Out the Vote events, too.

It’ll be a tough race in the Virginia 5th, but since Cockburn has focused her campaign on access to the Affordable Care Act, the environment, and reproductive freedom, she’s the modern candidate so many people (especially women-identifying voters) are clamoring for right now.

Don’t forget to vote today! If you need help finding your polling place or checking your registration, you can do so at Vote.org.

Related Stories
Scary Things That Could Happen If You Don't Vote
The 2018 Midterm Elections, by the Numbers
This content is created and maintained by a third party, and imported onto this page to help users provide their email addresses. You may be able to find more information about this and similar content at piano.io
Advertisement - Continue Reading Below
More From The 2018 Midterm Elections
One Week Post-Midterms Here's What We Know
How Ilhan Omar's Speech Started Is Important
Advertisement - Continue Reading Below
You Should Get a Dog! A Retired Greyhound!
What the Election Results Mean for Abortion
Women Won Big on Tuesday. Now Let's Get to Work
Deb Haaland Will Rep Indigenous People Nationwide
The Greatest Feminist Wins of the Midterms
Gretchen Whitmer Is Ready for the Top Job
Every Celebrity Who Voted in the 2018 Midterms
30 Celebrities Who Have Endorsed Politicians