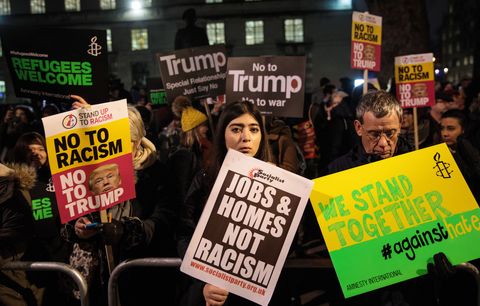 As the daughter of a Holocaust survivor, I know far too much about what closing borders to refugees means. And as a four-year veteran of the White House National Security Council, I know about how to make policies that keep us safe from real threats, not imaginary ones. I also know that the amateur policy-making behind the misguided Executive Order that President Trump signed on Friday—which was, let's not forget, International Holocaust Remembrance Day—will not make us safer. It will actually make us less secure.

Here's what a refugee actually is and not what the Executive Order implies they are: a person who has been forced to leave his or her country in order to escape war, persecution, or natural disaster. Refugees are not defined as terrorists. Refugees are not defined as members of ISIS. By freezing refugee admissions, we are literally turning away people fleeing threats to their actual safety.

I am alive today because my father survived the Holocaust by hiding on a farm and joining the French resistance. His whole family—and about 6 million other Jews—did not survive. The United States could have helped by offering sanctuary, but chose not to let in as many Jewish refugees as it could. We even turned back a ship of refugees docked right by our coast—so close they could see the lights of Florida—and sent them back to Europe and the Nazi killing machine.

The Executive Order that President Trump signed on Friday would similarly abandon refugees to persecution, and in some cases death. My father did not survive the Holocaust for this.

Mazdak Tootkaboni, an Iranian immigrant who is a green card holder, is welcomed at Boston Logan Airport on Sunday afternoon. Tootkaboni and his wife were detained on Saturday as they returned to the United States from Paris.
Getty Images

The Trump administration is hiding behind terrorism as an excuse for this extreme action. But how many terrorist attacks in the U.S. have been conducted by people from the countries Trump is banning refugees from? The answer is zero. According to the CATO Institute, foreigners from those countries killed no Americans in terrorist attacks on U.S. soil between 1975 and 2015. Worse, the U.S. government is now spending resources and time making sure refugees from these countries don't cross our borders when real potential threats to our homeland get less attention.

(There are Muslim-majority countries noticeably absent from the immigration ban, like Saudi Arabia and Egypt. And while the White House has given no formal explanation, we can guess the reason: Trump has done business there. He has ties. He knows people.)

The fiction continues when you think about the President's claim that he signed this Executive Order so the government could improve vetting processes for refugees. Refugees—when they begin their application to enter the U.S.—already go through a highly complex and difficult vetting process: hours of interviews, background checks, fingerprinting, filtering through personal data, and more. It is not pleasant, but it is a necessary way to make sure we know who we are welcoming to the United States.

But ultimately the fiction shatters: On Fox News this weekend, Rudy Giuliani stated outright that President Trump wanted to find a way to do a "Muslim ban."

So what's this all really about, at the end of the day?

Religious persecution. The very thing that nearly killed my father and ended the lives of 6 million Jews. The very thing we remember and say "never again." But today, in Trump's America, it's happening again anyway.

Sam Vinograd Samantha Vinograd began her career as the Deputy U.S.
This content is created and maintained by a third party, and imported onto this page to help users provide their email addresses. You may be able to find more information about this and similar content at piano.io
Advertisement - Continue Reading Below
More From Politics
Gwen Berry: Athlete, Activist, Olympian
The Anti-Choice Endgame: Power And Control
Advertisement - Continue Reading Below
Give Domestic Workers the Protections They Deserve
Kristin Urquiza Wants Justice for COVID-19 Victims
A Breakdown of VP Harris's Net Worth
WH Announces Removal of the Hyde Amendment
What Liberation Means This Juneteenth
Kathryn Garcia: It's Time to Step Up or Shut Up
A Valedictorian Speaks Out Against Abortion Bans
Standing Between Care and Violence