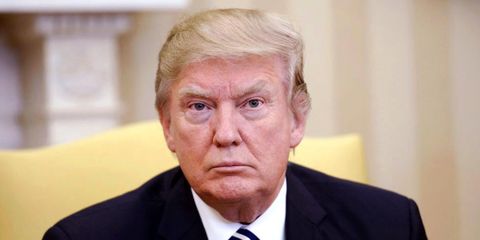 On Thursday evening, President Donald Trump ordered approximately 60 cruise missiles to be fired at an air base in Syria as retaliation for a chemical weapons attack on civilians earlier this week. The U.S. Tomahawk missiles were reportedly fired from warships based in the Mediterranean Sea, while Trump ordered the attack from his Florida estate Mar-a-Lago, where he is currently hosting Chinese President Xi Jinping and his wife. According to the Associated Press, "it was the first direct American assault on the Syrian government and Donald Trump's most dramatic military order since becoming president."

The attack was also in stark contrast to the president's previous stance on Syria, given that he has repeatedly expressed his belief that the U.S. shouldn't get involved by attacking the country. Before long, Trump's many tweets on the topic were quick to go viral—with many showing the president's former belief that they U.S. should not attack Syria under any circumstance.

In a statement on the attack on Thursday, Trump spoke of the innocent civilians who died during Syrian dictator Bashar al-Assad's attack this week and said, "no child of God should ever suffer such horror." He went on to explain that the attack was for "the vital national security interest of the United States to prevent and deter the spread and use of deadly chemical weapons."

Nonetheless, many couldn't help but point out how much Trump's stance on Syria had changed as a result of the attack. Here are just 14 of the president's tweets on the matter from throughout his candidacy, many of them targeted at former President Barack Obama.