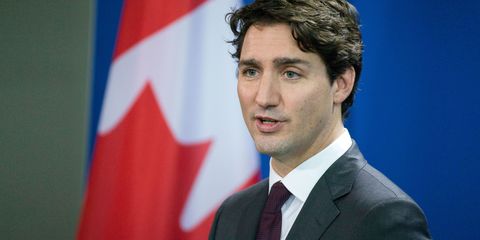 Canadians will be able to grow and smoke marijuana legally as of July 1, 2018, the CBC reports. New legislation will be officially announced April 10.

According to CNBC, Prime Minister Justin Trudeau ran on legalizing marijuana—a campaign promise that garnered major support with younger voters—and originally set a timeframe of doing so by spring 2017. The April 10 introduction of legislation will allow him to make that deadline.

Per the new law, the federal government will regulate the safety of the drug and license producers, but Canadian provinces will decide how much it's sold for and how it can actually be distributed. Ottawa has already decided you must be 18 to buy marijuana when it does become legal, but other provinces may decide on a different age. Canadians who want to grow marijuana themselves will be limited to four plants per household.

Tess Koman Digital Director Tess Koman covers breaking (food) news, opinion pieces, and features on larger happenings in the food world.
This content is created and maintained by a third party, and imported onto this page to help users provide their email addresses. You may be able to find more information about this and similar content at piano.io
Advertisement - Continue Reading Below
More From Politics
It’s Time to End Equal Pay Days and Pass the ERA
In Conversation With Secretary Granholm
Advertisement - Continue Reading Below
Laphonza Butler on What's Next for EMILY's List
Anita Hill Believes We Can End Gender Violence
For Teachers, Going to Work Can Mean Life or Death
Want to Help Moms? Prioritize Menstrual Equity
Abortion Rights Start at the State Level
All of Your Abortion Questions Answered
The Texas Abortion Snitch Site Is Having a Bad Day
The Future of Afghan Women Depends on Us